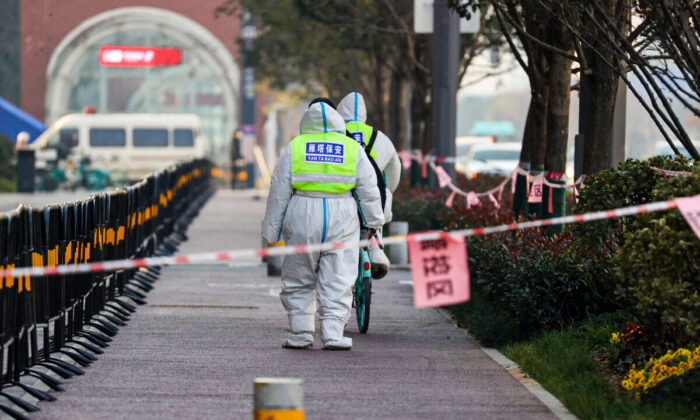 Security guards walk in an area that is under restrictions following a recent coronavirus outbreak in Xi'an city, Shaanxi Province, China, on Dec. 22, 2021. (STR/AFP via Getty Images)
CCP Virus

It has been over 10 days since Xi’an, China’s ancient capital for many centuries, was locked down on Dec. 23, 2021, with people only allowed to shop for food and necessities once every two days.

The northwestern Chinese city of over 13 million people officially recorded its first COVID-19 case on Dec. 9.

But by Dec. 26, shopping for necessities was completely banned and residents across the city were not allowed to leave their homes except for COVID-19 testing. There is no immediate sign that there will be any lifting of containment measures.

Almost two years into the pandemic, doubts are growing among residents regarding the effectiveness and necessity of the government’s stringent lockdown measures.

One Xi’an resident said in an online post that they believe over 1,000 residents were taken from their homes on New Year’s Eve to a suburban area for quarantine.

They told the Chinese edition of The Epoch Times on condition of anonymity that their friend was among the residents taken for quarantine, even though she had no symptoms and hadn’t left home since Dec. 17.

“On Dec. 31, in the middle of the night, the Maple Leaves Highrise Compound, Mijia Bridge Compound, and Mingde Eight Mile Compound transferred over 1,000 residents by bus to Xiangyang Ditch public rental buildings for collective isolation,” they said.

“There has been no notice regarding the transfer, and no [COVID-19] precaution or protection was taken in the transfer process. Information regarding the isolation arrangements is opaque, and there is no emergency hotline number.”

The anonymous resident said that it was really scary to see dozens of buses and a huge number of security people in white hazmat suits and fluorescent vests working in the area without any explanation of what they were doing.

It is winter now in Xi’an, with lows in daily temperature reaching below zero degrees celsius. The post also added that the public rental buildings were newly constructed and still lacked heating facilities. Those taken for isolation included the elderly, children, and pregnant women.

The resident also questioned the safety of packing all building residents together into buses to transport to quarantine.

A government document posted online on Jan. 1 revealed that the Secretary of the Provincial Chinese Communist Party (CCP) Committee had ordered to “zero out all positive cases by Jan. 4.” The document has since been taken down from the website and is no longer accessible.

Residents Beaten Up for Leaving Home for Food, Visit the Elderly

There are online videos showing residents being beaten up for leaving their homes for food or visiting family members.

On New Year’s Day, a man was beaten up by village authorities, which left his face bleeding. He went to see his grandmother living in Xiwu Village, as he was worried about her and wanted to see if she needed food.

“The village cadres don’t allow me to go in the village,” the man said a video of the incident. “Sun Zhaoqi [a village cadre] smashed a brick on my face.”

Another video shows a man holding a bag of steamed buns at the entrance of a compound. He was being hit by security staff. The buns scattered on the ground around him.

He could be heard saying in the video, “I don’t have any food.”

A security staffer was heard replying: “I don’t care if you don’t have any food.” Another man was heard shouting repeatedly: “You’re asking for trouble!”

The video has gone viral on Chinese social media platforms, and netizens have given the young man the nickname “brother steamed bun.”

A migrant worker, who prefers staying anonymous, told the Chinese edition of The Epoch Times on Jan. 4 that he and another 17 migrant workers were most grateful to brother steamed bun. They have since received, for the first time, fresh produce from the local government—two daikon radishes, two Chinese cabbages, and several onions.

“[These vegetables are] definitely not enough for the 18 of us, but they’re better than nothing,” he told The Epoch Times. They have been trapped in Xi’an since the lockdown.

Another resident told The Epoch Times that he had received some food from the government after the video of brother steamed bun went viral.

The local police station released a notice on Jan. 1 claiming that the two staffers, who were pandemic prevention and control employees, have been sentenced to seven days of detention and a fine of 200 yuan ($31) each.

The police notice also stated that the two staffers had “apologized sincerely to Mr. Wang (brother steamed bun) and they won understanding of Mr. Wang.”

The Chinese edition of The Epoch Times has reached out to the police station for comment but the line has been busy.

Since the heightened lockdown was ordered on Dec. 26, Xi’an Residents have not been allowed to leave home to buy food or necessities, and online purchases and deliveries are out of service. Many people are running out of stock.

The Epoch Times reported earlier that residents were posting online about the shortage of food. There are now more online reports of soaring vegetable prices.

“The price of vegetables has skyrocketed in our local community, and yet we can’t get any, and rice is running out,” one post read.

According to a report by the Chinese edition of The Epoch Times on Dec. 30, residents have only been able to get produce from their community grocery store or compound property management company, packed and delivered by government-designated suppliers.

The property management company says they sell food according to “instructions from above,” and that “if anyone is found to have purchased [food] from other channels, they will get a yellow code.”

A yellow code designates a person as close contact of a confirmed COVID-19 case, and requires isolation for seven days.

When one resident complained about the high price of the company’s packaged boxes of fresh food at 480 yuan ($75) per box, property management staff replied: “Stop your [expletive] if you can’t afford it. You poor people deserve starving to death.”

Residents’ complaints now seem to have won the endorsement of some local officials.

The Shaanxi provincial governor, Zhao Yide, was reported by the local daily newspaper on Jan. 3 to have demanded that his subordinates “go all out to open up the ‘last 100 meters’ of grocery stocks and guarantee supplies.”

“Distribution of relief funds and fast food should be distributed in a timely manner, information channels for help should operate smoothly, responses to the needs of the masses should be on time, and effective protection should be provided to people for their basic living needs,” the governor was reported to have said.

The Epoch Times has reached out to the local authorities for comment.

Hu Yuanzhen contributed to the article.