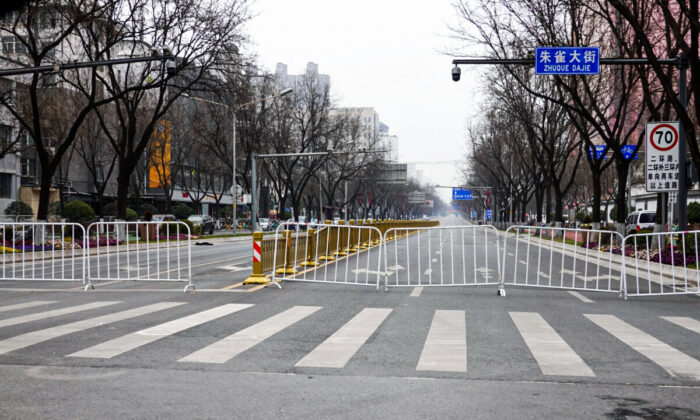 Amid the recent flare-up of COVID-19 cases since Dec. 9, 2021, Xi’an, the capital city of China’s northwestern Shaanxi Province, has been imposing harsh lockdown measures in an effort to bring down the cases.

The city, which has a population of 13 million, was locked down abruptly on Dec. 23, 2021. Initially, one member from each household was allowed to shop for groceries and necessities every two days. But as confirmed COVID-19 cases continued to pile up despite the stringent measures, residents were further banned from leaving their homes except for COVID-19 testing on Dec. 26.

A leaked document revealed that the Chinese Communist Party’s (CCP) chief of the province set a Jan. 4 deadline by which Xi’an “must achieve the goal of societal zero COVIDF-19 cases.” The document has since been taken down from the Chinese intranet and is no longer accessible.

Since the outbreak of the pandemic in Xi’an, residents have been crying out for help on Chinese social media, which has been inundated with posts and videos seeking help and complaining of incompetence by the local authorities.

On Jan. 1, a public Wechat account named “Chudingya” uploaded an article describing seeing around 30 buses at a compound entrance and an “uncountable number of [people wearing white hazmat suits]” in the compound from 8 p.m. on New Year’s Eve.

In a video posted on Jan. 2, a woman asked a security person sitting behind a desk at an isolation site why there was no breakfast. She also complained that she could not get a tampon after calling all the hotlines, including the police hotline. The security staffer kept touching his smartphone throughout the video, and finally, the woman went back to her isolation room without getting any help from the man.

Wang Qin (using an alias for her safety) told the Chinese edition of The Epoch Times on Jan. 2 that the COVID-19 pandemic had been spreading very quickly in Xi’an’s local communities. The Lianhu District where she lives is among the worst-hit in Xi’an, as many students at the Xi’an Aeronautical Institute have been infected by COVID-19 and have been removed to the surrounding suburbs for quarantine.

A report on Dec. 31 on China’s popular news website 163.com said that the Xi’an Aeronautical Institute began to transfer over 2,000 students and staff members to four counties in Xi’an.

Wang said that some students were put on a bus and traveled for five to six hours before they arrived at their quarantine site, only to find steel bunk beds with minimal bedding, and no heating at all despite the cold sub-zero winter conditions.

Another online video showed dozens of people standing in the cold as the isolation hotel told them there was no room available.

A resident said in another video that all the residents in the building were packed into buses without being told their destination. They were jammed on the highway at 1 or 2 a.m. “Everyone is scared—if there is one case on the bus, wouldn’t all the rest of us be infected in the sealed space of the bus?” the resident asked.

Radio Free Asia reported on Jan. 4, quoting Ms. Liu, a retired government employee, criticizing the local authorities for “messing around”: “There are four bunk beds and one quilt in the isolation rooms. How can that be called an isolation room? People will be lucky if there’s no cross-infection.”

Wang told The Epoch Times: “Now as long as there is one close contact, you will be immediately put under home isolation, and your entire compound is sealed off if you are not removed from your home.”

A fire broke out in one compound in Chang’an District at midnight on Dec. 31. When the fire brigade arrived, firefighters had to climb over the iron gate, which was sealed by solder, to put out the fire, according to Wang.

A source who asked to stay anonymous for the sake of their safety told the Chinese edition of the Epoch Times that all the CCP’s district secretaries have been required to guarantee the accomplishment of zero COVID-19 cases in their districts.

According to the source, these CCP cadres have controlled the spreading of the CCP virus in a simple way—once there is a confirmed case, all residents in the same building will be taken away for isolation outside Xi’an, allowing official reports to say that this district has achieved the zero-case target. If there is another outbreak, it will be regarded as occurring at the isolation site, not in Xi’an.

What Is ‘Societal Zero COVID?’

The phrase “societal zero COVID” is a new term used by the Shaanxi provincial authorities, which was not used in China before the Xi’an flare-up.

The local center for disease control and prevention explained to Chinese reporters on Jan. 5 that it meant “no more community transmission” as “all new confirmed cases found afterward [since Jan. 4] are among close contacts or close contacts of close contacts who have been isolated,” said Chen Zhijun, a deputy director of the center at the press release of the day.

China observer and commentator Tang Jingyuan said, “To put it plainly, it means that the authorities immediately remove all the new confirmed cases and their close contacts out of the city to its suburban districts. By doing so, the urban area of Xi’an is able to fulfill its so-called zero-case mission in a quick way.”

According to a Jan. 4 report by the CCP’s mouthpiece Xinhua News Agency, since Jan. 1, confirmed cases have been declining on a daily basis, and “the proportion of cases from government isolated people has gradually increased, while cases at the societal level have gradually decreased.” The state-run media boasted of the effectiveness of the local authorities’ harsh measures.

As of Jan. 3, Xi’an has recorded altogether 1,758 confirmed cases of COVID-19, according to official data. But the actual number could be much higher due to the CCP’s routine cover up of COVID-19 cases.

The Epoch Times has reached out to the local authorities for comment.

Li Jing and Sophia Lam contributed to the report.