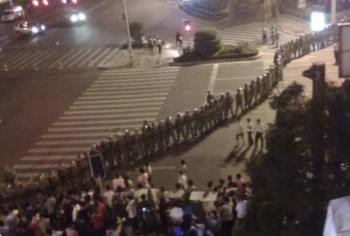 Local authorities dispatch over 1,000 police to the scene where taxi drivers staged a protest on the night of Oct. 6. (Weobo.com)
China

When thousands of taxi drivers in Xiamen in southern China’s Fujian Province went on strike on Oct. 6, the situation turned violent as striking drivers beat non-striking drivers and damaged their cars.

Negotiations between the striking taxi drivers and their employers broke down on Oct. 7. Organizers of the strike said they would strike until Oct. 30 if an agreement couldn’t be reached.

Drivers of three major taxi companies were protesting high taxi rental fees, rising gas prices, and the government’s plan to increase the number of taxi licenses even though startup fares hadn’t been increased in 12 years.

During the protest, the taxi drivers held up traffic and caused a massive traffic jam. Authorities dispatched 1,000 police to the scene and arrested some protesters.

Some Chinese media and bloggers described the strike as violent, as some striking drivers beat non-striking drivers, took away their car keys, and forced them to turn off their engines. At least 60 taxis were damaged in the mêlée.

Taxi driver Mr. Xu told The Epoch Times that thousands of drivers participated in the strike on the morning of Oct 6. “Many drivers were on strike and the line extended for more than two kilometers (a little over one mile). I couldn’t even see the end of the line. Thousands of policemen were also at the scene,” he said.

Another taxi driver, Mr. Zhao, told The Epoch Times that the drivers went on strike to protest their low profit margins, “The government exploits taxi companies, who then exploit taxi drivers. Hence the drivers are at the bottom of the chain. We work immensely hard only to earn less than we need to support our families.”

In the past year taxi driver strikes have become increasingly common in China. In August alone, strikes occurred in Hangzhou and Wenzhou in Zhejiang Province, and Cang County in Hebei Province.

Xu Guangjian, Vice Dean of the Institute of Public Finance at the School of Public Administration in Renmin University, said, “The reason behind the strike is that local governments have deliberately delayed taxi fare adjustments to rein in inflation; but inflation has caused a decrease in taxi drivers’ net profits.”

Xu suggests that taxi fares should keep up with inflation and should be adjusted as required.

You Chenli, a researcher at the privately funded think thank Transition Institute in Beijing, has been following taxi strikes for a while. He told Sound of Hope (SOH) Radio that the government controls the number of taxi vehicles, but taxi drivers must pay high rental fees to taxi companies, which puts taxi drivers and passengers at a disadvantage, and facilitates monopolization by existing taxi companies.

He also said that it is very difficult to decrease rental fees because the power of interest groups is very strong. However, he pointed out rate increases are not always the answer because demand drops when taxi fares increase, which further reduces the taxi driver’s income.

You suggested that if the authorities didn’t control the number of taxis and if more individuals were allowed to own their own taxis, the problem could be mitigated