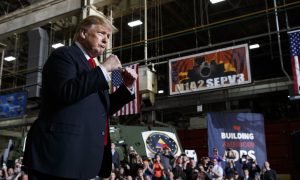 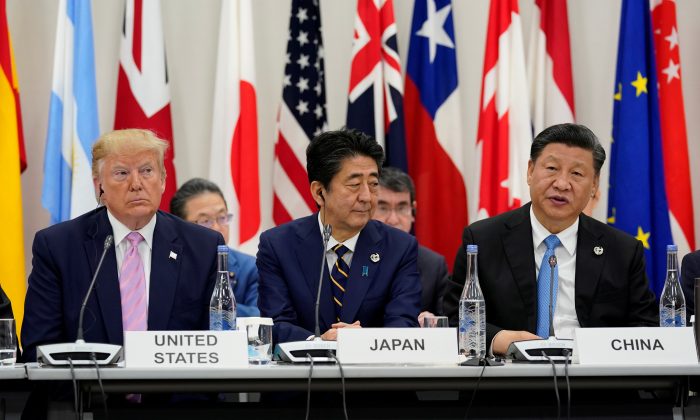 Chinese leader Xi Jinping made sure to shake hands with President Donald Trump before the “family photo” at G-20 Summit in Osaka, Japan on June 28.

As world leaders moved to their allotted positions during the photo-op, Xi, after first shaking hands with German Chancellor Angela Merkel, made a beeline towards Trump, who was several spots away in the first row. They shook hands and briefly exchanged some words. Xi then turned back to take his assigned place. On his way towards Trump, Xi breezed past Russian President Vladimir Putin, whom the Chinese leader had described as his “best friend” earlier this month.

This marked the first face-to-face interaction between the two leaders since meeting at the sidelines of the G-20 Summit in Buenos Aires last December when they agreed on a trade ceasefire—a truce that ended this May when trade talks broke down. The United States accused the Chinese regime of reneging on agreed-upon provisions.

Trump and Xi are set to meet at 11:30 a.m. local time on June 29 in a hotly anticipated engagement. Many hope that the meeting will lead to another trade truce, and pave the way for talks to restart between the world’s two largest economies.

Trump said at the end of meetings on June 28 that he expected talks with Xi the following day would be productive.

“At a minimum it will be productive. We’ll see what happens and what comes out of it,” Trump told reporters. “It will be a very exiting day. I’m sure.”

Asked, however, if he had promised Xi a six-month reprieve on imposing new tariffs on a $325 billion list of Chinese imports, as some media had reported, Trump said: “No.”

Trump raised tariffs on $200 billion of Chinese imports in May in response to the regime’s backtracking, and has threatened to impose additional tariffs on another $325 billion of goods, to include effectively everything that China exports to the United States. China has retaliated with a tariff hike on U.S. imports.