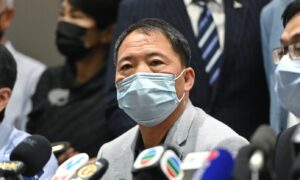 For the last two days Chinese media has been abuzz with the news that Chinese Communist Party leader Xi Jinping took a very ordinary taxi ride in Beijing last month, dressed in casual clothing and accompanied by an unidentified man.

Soon after it went viral however, the story was quickly purged from Chinese websites and loudly labeled a fake—now, observers are trying to figure out what happened.

The story was first published in the Beijing-backed Ta Kung Pao newspaper, printed in Hong Kong, which devoted an entire page to the story on April 18.

46-year-old cab driver Guo Lixin reportedly said he couldn’t help but notice the face of a passenger, and asked him, “Has anyone ever said that you look like General Secretary Xi?”

Xi laughed and replied, “You are the first driver to ever recognize me in a taxi.”

Guo claimed Xi gave him a short note of encouragement written on the back of a receipt, along with 30 yuan for the 27-yuan, 5-mile trip, telling him to keep the change.

The story was also posted in Guangming Daily, a state-run newspaper, and the official mouthpiece of the state, Xinhua. A Xinhua affiliate posted a message on Weibo that traffic authorities had confirmed the story.

A few hours later, Xinhua wasn’t so confident. It released a statement declaring the story a complete “fabrication.” The Beijing Municipal Commission of Transport denied confirming the story on their official Sina Weibo account, and Ta Kung Pao pulled the report from its website and issued an apology.

Now, the story is about what happened to the story.

Popular blogger Xu Xin posted the two opposing stories by Xinhua together and wrote: “[State-run media] reported consecutively two opposite news stories.” It was forwarded more than 4,400 times within 4 hours.

As the news spread like wildfire, searches for key words like “Beijing taxi” and “Guo Lixin” became blocked on Sina Weibo.

“Why all the fuss about Xi Jinping taking a taxi?” said a micro-blogger. “Should we also now report on Xi Jinping having dinner incognito, sleeping incognito [and] going to the lavatory incognito?”

Another user said, “If one of the nation’s leaders wants to act like this, isn’t it something we should encourage? Why the laughter?”

Hong Kong’s South China Morning Post ridiculed the story, calling it “a well-choreographed public relations stunt aimed at portraying the Chinese leader as a man of the people.”

Many bloggers criticized the media for publishing an apparently false report, which again highlighted the public’s general distrust of the regime.

Foreign Ministry spokeswoman Hua Chunying said she had no information about the issue at a news briefing on April 18, according to Bloomberg.

But just as the brouhaha looked to be dying down, pictures purporting to prove Xi Jinping did take a taxi ride emerged online. Another Twitter user, however, alleged that the photographs were doctored. He Qinglian, a respected columnist, responded to the picture by saying the truth of the matter is “unknowable.”

Translation by Frank Fang. Written in English by Sarah Le.