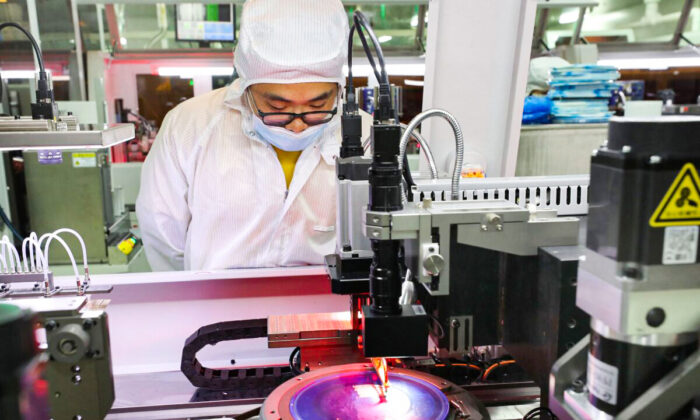 An employee monitors the making of chips at a Jiejie Semiconductor Company factory in Nantong, China, on March 17, 2021. (STR/AFP via Getty Images)
Technology

When five Chinese companies were recently sanctioned by the United States for allegedly supporting Russia after its invasion of Ukraine, the move amplified China’s sense of crisis in its tech industries. Chinese state media openly admit that China’s semiconductor industry faces numerous challenges. During a visit to Wuhan at the end of June, communist leader Xi Jinping emphasized that there is an urgent need to make key breakthroughs, as China’s high-tech industry is being strangled by developed countries in some key areas.

The U.S. Department of Commerce on June 28 placed five Chinese companies on a trade blacklist, saying they support Russia’s military and defense industrial base. Three of these companies are related to chip manufacturing or semiconductor electronic components.

“What if SMIC [Semiconductor Manufacturing International Corporation] or other Chinese-based semiconductor companies are found supplying chips to Russia? We will shut them down and we can, because almost every chip in the world and in China is made using U.S. equipment and software and I intend to make good on that commitment if it’s necessary,” Raimondo said at the Commerce Department’s annual meeting.

During an inspection tour in Wuhan, Hubei Province, Xi Jinping paid a visit to HGLaser Engineering Co, and gave a speech emphasizing the urgent need to achieve scientific and technological self-reliance.

“Breaking through critical technologies has become a matter of great urgency,  as we must keep the lifeline of science and technology firmly in our own hands,” he said.

Speaking of the importance and urgency for the breakthroughs, Xi explained that China’s high-tech development is being “strangled in the neck” in terms of these critical technologies.

On June 30, Chinese state media Beijing News quoted insiders as saying that the United States is planning to impose another round of sanctions on Chinese chip companies, which may include Hua Hong Semiconductor, ChangXin Memory Technology, and Yangtze Memory Technologies. Moreover, foreign-funded enterprises with Chinese branches, such as South Korea’s SK Hynix, Germany’s Infineon, and the United States’ Texas Instruments, may also be sanctioned.

“China’s semiconductor industry has long been ‘strangled in the neck’ and is currently facing a multitude of risks. In addition to U.S. sanctions, Chinese companies have to face international political instability, increasingly fierce global competition, and rising raw material costs,” Beijing News said.

According to a report by the Boston Consulting Group (BCG) and the Semiconductor Industry Association (SIA), in 2020, China’s logic chips and memory chips accounted for less than 1 percent on the global market; electronic design automation only accounted for 3 percent; and discrete devices and analog devices accounted for 7 percent.

Although China had a 16 percent share of the world’s capacity for fabricating IC wafers, its products are mostly mid-to-low-end, which is two to three generations behind the international level.

A senior Chinese expert in the industry told Beijing News that taking Dutch company ASML’s high-end lithography machine as a reference, it will take at least 15 years for China to complete the research and develop a high-end lithography system at the same level as ASML.

Ji Lin, a Chinese national and engineer working in the Japanese IT industry, told The Epoch Times that the sweeping sanctions imposed on Russia by the international community, especially the chip sanctions, not only weakened Russia’s strength in advanced weapons on the battlefield, but also caused its national strength to plunge into a long-term decline. International sanctions have exacerbated the CCP’s sense of crisis, as exemplified by Beijing’s recent order to replace all computers with domestically produced computers in central government agencies and state-owned enterprises.

Ji said that chipmaking involves electronics, optics, precision machinery, software simulation, and other aspects. No country in the world can achieve fully closed-loop production. Even Taiwan’s TSMC, recognized as a chipmaking leader in the world, cannot achieve it, not to mention those Chinese companies that are 10 years behind TSMC. It is therefore impossible for China to realize full-scope self-independence in chip production.