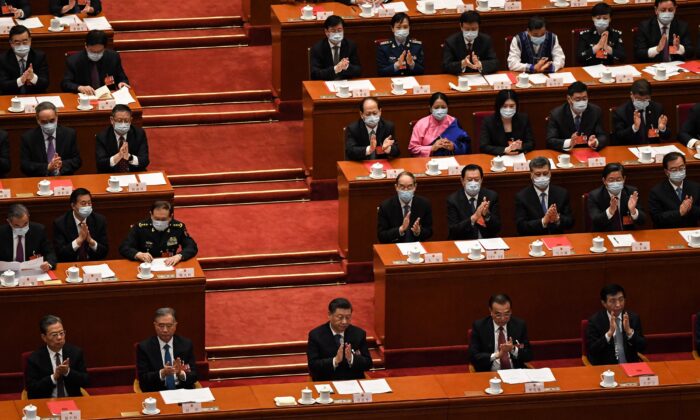 Xi Jinping’s Gamble Becomes Precarious—but Where Is the West?

Every day, as 2022 progresses, some indicators defy the narrative of the Chinese Communist Party (CCP). These contra-indicators show that a tumultuous and delicately-balanced internal war is still underway to preserve the career of CCP leader Xi Jinping in the run-up to the critical 20th Party Congress in October.

Xi has thrown everything—including the fate and welfare of the Chinese population and the strategic posture of China—into ensuring that he is reelected as General Secretary of the Party. If he is not, then he will be fighting for his life.

Significantly, the U.S. White House, preoccupied with fighting Russia through Ukraine, has essentially given Beijing a pass. President Joe Biden has not used this period of chaos and economic decline in China to add pressure on Xi.

Even without U.S. pressure, Xi faces challenge after challenge. And the latest may be the most important.

Chinese private citizens, who have staked all their savings to buy apartments on speculation, have found that the giant developers to whom they have entrusted their savings are insolvent, taking their investors’ funds with them. The iconic flagship of this implosion was the Evergrande Group, which has been crumbling in a slow-motion crash beginning in 2020 with an unmanageable debt of at least $100 billion.

Disillusionment with the entire, fragile Chinese housing development sector—essentially the core of China’s historical GDP growth and the only retirement asset destination for Chinese savers—has led to mass protests on a scale that has the potential to spell the end of the CCP. Even the so-called “zero COVID” crowd suppression campaigns, which had nothing to do with containing the disease but everything to do with keeping people distracted and unable to mass in the streets, have failed to contain public anger.

The CCP, through the state-owned People’s Bank of China, had said that “the market” would deal with the likes of the reckless Evergrande and such as high-flying Anbang Group Holdings Co. and HNA Group. Let the chips fall where they may, the bankrupted investors disregarded.

Some two years of chaos and unstoppable protests later, Xi has quietly reversed that. There is now some evidence that Evergrande has been given leeway to reorganize and salvage many of its projects. There is the public vision that there is hope that all the investors’ funds may not be entirely lost and that the real estate in which they invested as their retirement resource could possibly be delivered.

Will this be enough to stem the rising anger of working Chinese and stave off protests at least until after the Party Congress? There is no certainty that it will. Popular distrust in the CCP has reached unprecedented levels within the urban population, in particular, and it is urban unrest that the Party fears most. It is what effectively ended the imperial rule of China in 1911 and the abdication of the young Emperor Pu Yi on Feb. 12, 1912.

China was then possibly only 5 percent urbanized at that time. Today it is 64.7 percent urbanized (2021). Even the mass suppression techniques perfected under the “zero COVID” lockdowns may not be enough to stop a new urban uprising, should it begin.

In the meantime, Xi must continue to bluster and threaten on the world stage, as much as anything to show the home populace that he still bestrides the globe. The level of unrest his policies and the general decline of the Chinese economy have created over the past decade threaten the entire Communist Party, not just Xi. As a result, even though Xi’s great body of opponents within the Party would welcome reining in the General Secretary, they cannot afford to throw the Party out with the bathwater.

It is a time of great instability when Xi could risk much to distract the population. Xi has already been criticized by People’s Liberation Army (PLA) theorists for becoming impatient with the tenets of Chinese strategy, including its Unrestricted Warfare theory, and threatening a military invasion of Taiwan. Such an event would be profound and likely to bring about the downfall of the CCP rule of mainland China.

The result of the Western leaderships missing the cue on China has meant that they have drawn down their military assets, particularly their operational ammunition levels, to a dangerous level to assist their proxy, Ukraine, in fighting Russia. But they have left forces in the Indo-Pacific depleted and vulnerable.

The West’s new stand-off weapons, critical to breaching PLA defenses, are still a year and more from deployment into the Indo-Pacific. Xi is counting on this to make his advances—through military and diplomatic bluster—before the October Party Congress.