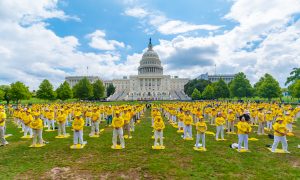 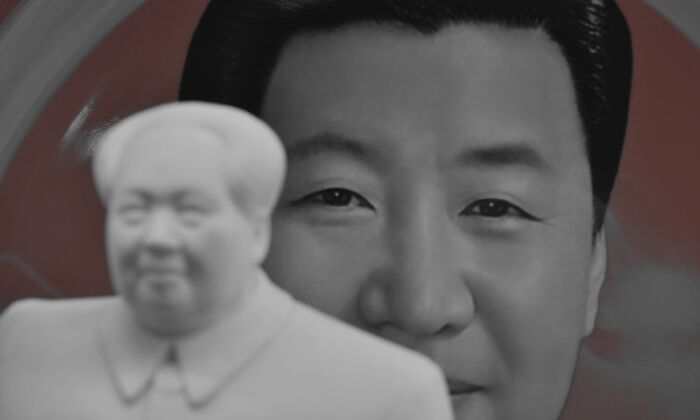 A decorative plate featuring an image of Chinese leader Xi Jinping is seen behind a statue of late communist leader Mao Zedong at a souvenir store next to Tiananmen Square in Beijing, China, on Feb. 27, 2018. (Greg Baker/AFP via Getty Images)
Thinking About China

Summer is when the annual conclave of top Chinese Communist Party (CCP) leaders takes place at the seaside resort of Beidaihe. The CCP’s Ministry of Foreign Affairs and its mouthpiece seem to work in sync to prepare for this unpublicized event and there’s much we can gain from seeing how they operate in advance of the meeting.

The regular press conference of the Ministry of Foreign Affairs is now in an unexpected recess from Aug. 2 to 13 but the Spokesperson’s Office continues to accept questions by fax, e-mail, or WeChat.

So far, the ministry has published a Q&A on its website that reflects the significance of the Beidaihe meeting to CCP leader Xi Jinping, who needs to focus on the meeting more than domestic or international affairs.

Xi is the CCP’s leadership core, and he has the final say on matters brought up in the regular press conference of the Ministry of Foreign Affairs.

On July 31, Xi demonstrated his absolute leadership when he addressed the party’s Central Committee study session on the military and demanded the political loyalty of the regime’s armed forces.

Xi has also recently exerted his dictatorial power as seen in a series of attacks on Chinese internet companies such as Alibaba, etc., which were supposedly the white gloves of Xi’s political opponents. His anti-graft organs may also have targeted certain “flies and tigers” at all levels in preparation for the secret meeting.

In accordance with the party’s needs, the regime’s media have also launched an aggressive new round of propaganda.

On Aug. 4, Xinhua News published, “The Seven Sins of the U.S.’ Alliance System,” an article of more than 24,000 characters targeting the United States and its allies.

This article blames Western democracies for Xi’s diplomatic failures as shown in China’s isolated situation in the world. In other words, Xi has been forced to react to American hegemony and the West’s ambition to subvert the regime.

There was another article published on the same day, “Whose Side Exactly Are U.S. Politicians On? The Truth About the U.S.’ Violent Interference in China’s Internal Affairs on Hong Kong-related Issues.” The article publicly supported Xi’s brutal suppression of Hong Kong protestors.

Following these two articles to defend Xi before the meetings, party media published another article to counter any challenges from Xi’s political opponents, “The Unity of Chinese Sons and Daughters Must be Strengthened—The Eighth Review of the Series of ‘Taking History as a Mirror, Creating the Future.’” It described Xi’s call on unity as an “indispensable code for national rejuvenation.”

All this media activity is tantamount to summarizing Xi’s worries prior to the secret meeting in Beidaihe. He’s calling for unity before the coming demise of the party. Of course, there are a plethora of issues that need to be discussed behind closed doors, such as the floods, the pandemic, the economy, etc. Enough problems to be used as political weapons by others against him. It looks like the Beidaihe meeting could be Xi’s battleground.