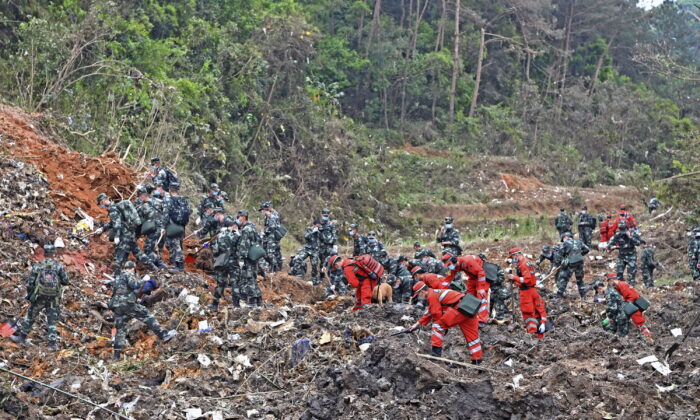 Rescue workers search for the black boxes after a China Eastern flight 5735 carrying 123 passengers and 9 crew members crashed outside the city of Wuzhou, Guangxi Province, on March 22, 2022. (Zhou Hua/Xinhua via AP)
Analysis

After a China Eastern Airlines plane crashed in southern China, Chinese Vice Premier Liu He, who has never been involved in disaster handling before, went to the site overnight, and the Chinese military and armed police were quickly dispatched to assist in the rescue efforts. Some analysts believe that these are moves that suggest that Beijing’s top officials are guarding against one another.

At about 2:38 p.m. on March 21, China Eastern Airlines flight MU5735 lost radio contact and then nosedived into a mountainous area in Wuzhou, Guangxi Province. With 123 passengers and 9 crew members on board, the plane was on its way from Kunming, Yunnan Province to Guangzhou, Guangdong Province. No survivors have been found after two days of combing the site.

On March 23, one of the two black boxes on the plane was recovered and sent to Beijing immediately. During a news conference that same day, Chinese authorities said they believe it is the plane’s cockpit voice recorder.

On the day of the crash, China’s Xinhua News Agency reported that Vice Premier Liu He and State Councilor Wang Yong rushed to Wuzhou on the evening of March 21 to lead the rescue efforts for the investigation of the cause of the crash.

Chinese military troops were also dispatched to the site. Xinhua News Agency reported that on the day of the incident, China’s Southern Theater Command quickly activated an emergency response, and both the People’s Liberation Army and the Armed Police’s Wuzhou Division lost no time in sending personnel to the crash site. Moreover, an army aviation brigade, a combined arms brigade, an air assault brigade of the army, a transportation search brigade of the air force, and officers of the armed police stationed around the incident site were on alert to support at any time, the report said.

Chen Pokong, a U.S.-based Chinese political commentator, said on his YouTube program on March 23 that the crash involved a civil aircraft, not a military aircraft, and it was unusual for the Chinese communist regime to dispatch troops from the Southern Theater Command.

He believes that the military and armed police were dispatched for the purposes of sealing off the area, blocking the flow of information, or conducting military investigations, as the search efforts are usually the task of other agencies.

After the airplane crash, Chinese Premier Li Keqiang, who is in charge of the State Council’s investigation team, and Chinese leader Xi Jinping, who was in charge of the military and the armed police, each gave specific instructions. Xi demanded immediate activation of the emergency response plan, spare no effort in search and rescue, and pay attention to disaster relief work. Li, on the other hand, demanded that those involved in investigation and rescue “be honest and truthful, publicize information in a timely and accurate manner, find out the cause of the accident, and do well in comforting the families of the victims.”

Chen believes that Liu is representing Xi. Although he has the title of Director of the Safety Production Committee of the State Council, he isn’t usually involved in air crash incidents in any way. Wang Yong is Li Keqiang’s close aide. Xi does not feel comfortable if only Li’s delegate is present. Therefore, he also sent over his own close aide Liu He, in order to monitor the situation and collect first-hand information.

“It is even more unusual that Southern Theater Command was dispatched, and four more brigades ready to ‘support’ at any time. This is not war. There is the mystery behind it,” Chen said.