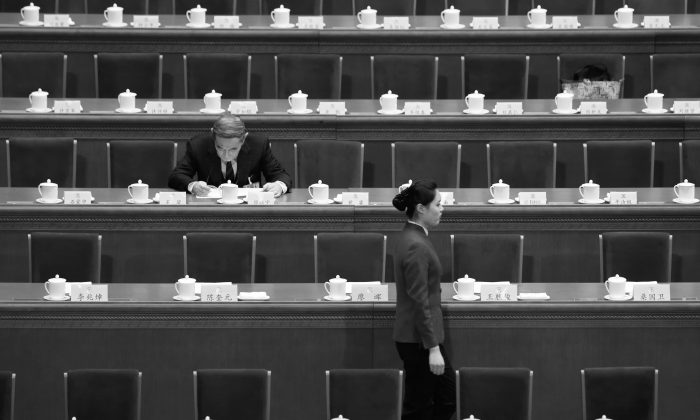 Chinese economist Li Yining sits among empty chairs at the People's Political Consultative Conference held at the Great Hall of the People in Beijing, on March 3, 2013. (STR/AFP/Getty Images)
Chinese Regime

Xi Jinping’s Anti-Corruption Purge Has Taken Down so Many Top Officials, There Are Jobs Left Empty

Since taking power in 2012, Xi has taken down many officials belonging to an opposition faction loyal to former CCP leader Jiang Zemin.

Following the pivotal Party conclave, the 19th National Congress, that concluded in October, Xi has installed his confidants into top leadership positions, while continuing to take down provincial and city-level high officials across the country via corruption investigations.

An analysis of official announcements reveals that 12 provincial-level positions have yet to be filled after previous officials were ousted from their post.

According to Party convention, aside from Xinjiang and Tibet, the other 29 provinces, which include four municipalities that are centrally governed—Beijing, Tianjin, Chongqing, and Shanghai—should have two deputy secretaries. Yet currently Tianjin and Fujian Province are each missing two deputies, while Hebei, Liaoning, Zhejiang, Guizhou, and Shaanxi provinces are missing one.

Meanwhile, Tianjin, Fujian, and Shaanxi are also missing a city or provincial mayor.

Another key position that is still empty is the chairman of the China Insurance Regulatory Commission. The former chairman Xiang Junbo was sacked in April.

The previous Communist Youth League central party secretary Qin Yizhi was demoted and switched out of the position in September, and his replacement has not been secured yet.

Meanwhile, a slew of sacked officials are still awaiting their fate. Twenty-five officials have yet to be sentenced: 22 have been expelled from the Party and their administrative posts but have yet to be tried in court; two are still under investigation; and one has been tried but with no pronounced sentence yet.

Ma Jian, the former vice minister at the Ministry of State Security, has been in limbo the longest. He was put under investigation in January 2015, then expelled from the Party and his post in December 2016, meaning it has been 714 days since he got sacked.

His case is complex, involving many relatives and their bribes. Ma was close with former vice-premier and Jiang henchman Zeng Qinghong, as well as the exiled dissident businessman Guo Wengui.

A sorry fate likely awaits former Fujian provincial mayor Su Shulin, who also had close ties with Zeng and another Jiang faction bigwig, former security chief Zhou Yongkang. Together, the three made dealings to profit off the petroleum industry.

Fang Xiao and Xu Meng’er contributed to this report.