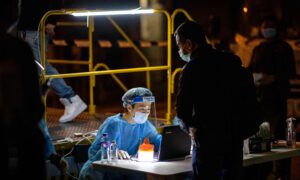 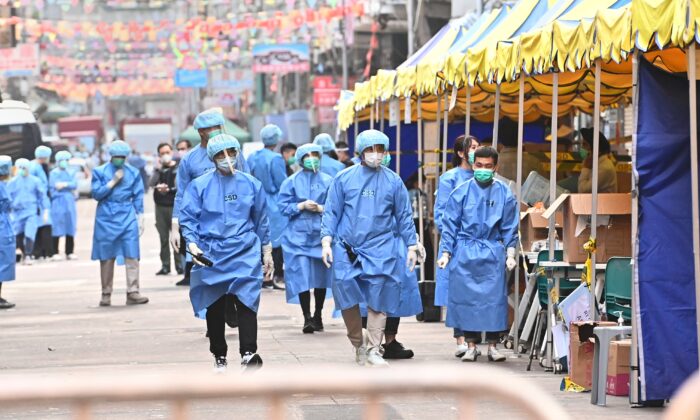 Medical workers walk on Temple Street in the lockdown area of Jordan in Hong Kong, on Jan. 24, 2021. The Hong Kong government recently enacted mainland-style lockdowns in its efforts to curb the spread of COVID-19. (Adrian Yu/Epoch Times)
Thinking About China

After the Chinese regime implemented the national security law in Hong Kong, the situation in Hong Kong has deteriorated drastically. With mass arrests of pro-democracy activists and the frequent deployment of his trusted officials to Hong Kong, Chinese leader Xi Jinping has shown his determination to transform Hong Kong into a place akin to communist China.

Recently, the sudden unannounced lockdowns and mass compulsory testing for COVID-19 have all happened in Hong Kong just like in mainland China. The Hong Kong government also announced that it would require citizens to register phone SIM cards with their real names. The company that approves internet domain names recently said it would now reject any sites that “incite illegal acts.”

Xi has also placed his cadres in key positions within the Party departments in charge of Hong Kong affairs.

The banner of “patriots ruling Hong Kong” is actually part of Xi’s “red dream” for Hong Kong. And it is Xi’s first step into attacking the free world.

On Feb. 1, in an effort to curb the spread of COVID-19, the Hong Kong government designated four “restricted areas” for lockdown and compulsory testing: the neighborhoods of Yuen Long, Tsim Sha Tsui, Yau Ma Tei, and Hung Hom.

Prior to that, the government has imposed sudden neighborhood lockdowns three times within a week.

On Jan. 28 to 29, in North Point, 475 residents were tested and there was no positive case. Approximately 15 people did not do the test and the Hong Kong government issued a fine of 5,000 Hong Kong dollars (about $645) for each person.

These measures have shaken Hong Kong society. Many criticized them as inefficient and a waste of taxpayer dollars. As a model of Xi’s “great fight against the epidemic,” these tough measures may get even more intense in Hong Kong.

The government announced on Feb. 1 that areas will be closed off more frequently in the next 10 days until Chinese New Year’s Eve. At the same time, it was announced that as long as there is one confirmed case of no known source within a residential building, or if sewage from the building tests positive, testing for the whole building will be mandatory.

Hong Kong leader Carrie Lam said that in order to prevent residents from escaping the compulsory testing, it will be done “ambush style.” One can imagine the extent of the government’s distrust of its people.

Since January this year, HK’s freedom of information has also been increasingly restricted. The website Hong Kong Chronicles, dedicated to information about pro-democracy protests, was blocked. The Hong Kong Broadband Network said it did so in compliance with the national security law.

On Jan. 29, the government announced its plan for mandatory registrations for mobile phone SIM cards with full name and ID and/or company registration information. The government’s public consultation period for the proposal is one month—less than the conventional three-month period.

In the beginning of 2021, Beijing is quickly tightening its noose on Hong Kong.

On Jan. 26, Shi Kehui, a former subordinate of Xi while they worked in Zhejiang Province, was appointed to lead the anti-corruption watchdog unit within Beijing’s top office in charge of Hong Kong affairs, known as the Central Commission for Discipline Inspection in Hong Kong and Macau Affair Office (HKMAO). Shi was previously director of the anti-corruption watchdog in Guangdong Province, which borders Hong Kong.

Shi worked closely with Xi; he was deputy Party secretary of Zhejiang while Xi was the Party secretary. The anti-corruption unit within the HKMAO, as is the case with other Party agencies, has become Xi’s way of supervising officials and implementing his economic and pandemic prevention policies.

Then, sometime in late January, Chen Feng, director of the police bureau in Putian city, Fujian Province, took over the police liaison department within Hong Kong’s Liaison Office. Chen was an old subordinate of Wang Xiaohong, member of the CCP’s Central Committee and executive vice minister of the Ministry of Public Security. Wang was close to Xi. When Xi was the Party secretary of Fuzhou city, Wang was director of the police (public security) bureau and was Xi’s chief security officer.

On Jan. 27, Hong Kong leader Carrie Lam reported her work to Xi via a video link, according to Chinese state-run media Xinhua. Xi stressed that “patriots should govern Hong Kong.” The so-called patriot is someone who believes in CCP rule. Under the Chinese regime, the country is the Party, and the Party is the country.

In short, Xi believes that to solve the Hong Kong problem, the city must be governed by patriots, that is, people trusted by the Party to govern Hong Kong. This is why Hong Kong has undergone frequent personnel changes recently.

Xi has a Hong Kong dream, which is to make Hong Kong more “red” and increasingly like the mainland. Xi has also said he hopes to build a global “community with a shared future for mankind”—bringing communist influence to the world. Governing Hong Kong under the CCP model is Xi’s first step toward infiltrating the free world.

But this dream is a double-edged sword. Hong Kong was once part of a free society and was known as the Pearl of the Orient. The more Xi controls Hong Kong the way he does China, the easier it will be for people to realize the true menace of the CCP.

Dr. Tang Qing, based in the United States, is a senior journalist.