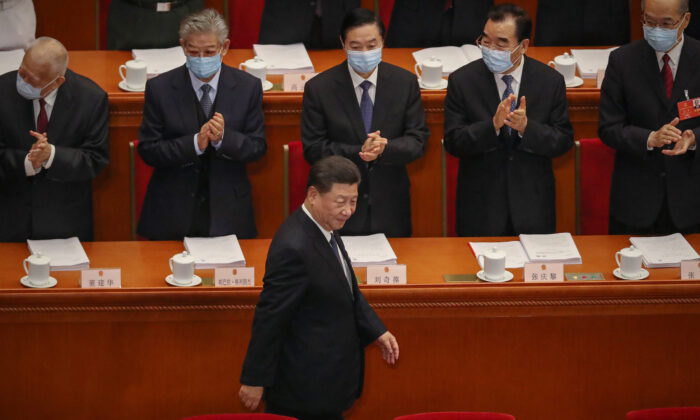 Chinese Communist Party’s head Xi Jinping arrives at The Great Hall of the People for the opening of the National People's Congress in Beijing, China, on May 22, 2020. (Andrea Verdelli/Getty Images)
Thinking About China

Economic troubles cast doubt on the future of Xi’s agenda

Right now, China faces an array of economic troubles, and evidence is mounting that they are creating resistance to Chinese leader Xi Jinping’s economic agenda.

America and China, for all their vast differences, have one big thing in common. When it comes to securing political power, the crucial issue is, in the words of one-time Clinton adviser and political commentator, James Carville, “the economy, stupid.”

Of course, political maneuvering in China always takes place in the shadows. But if it is hidden from view, no one should doubt that it occurs. In any country under any system, in any institution, when there are two or more ambitious, capable people involved, there is political maneuvering.

America’s legacy media often write and speak as if China’s leadership has an unanimity of purpose. This easy but naive assumption defies both human nature and experience. And in China, that lack of unity has begun to leak out in the face of the country’s economic and financial troubles. It seems to center less on Xi’s ambition to rule for life than on his push to rebuild China’s once rigid adherence to centralized economic decision-making.

Heading the list of Xi’s problems is the once-great property developer, Evergrande. With the equivalent of $300 billion in liabilities, it recently announced the default that for months all knew was inevitable. As indicated in this column months ago, Evergrande was never alone in carrying unsustainable debt. Now other defaults are rumored or have already been announced. According to calculations made at the Asia society, this vulnerable debt already amounts to some 29 percent of China’s gross domestic product (GDP). The matter threatens the stability of Chinese finance and even the economy.

A lot of blame has fallen on the managements of these developers, but still the difficulties have emerged on Xi’s watch, and reasonable people, even in China’s government, are aware that much of the problem stems from official Beijing’s long promotion of real estate development, almost without regard to what Chinese buyers wanted or where. Both considerations have bolstered doubts about Xi’s centralizing agenda.

In addition to these serious financial matters, China’s economic prospects have also suffered from the waves of COVID-19 that, if not Xi’s fault, nonetheless weaken his position, and from power shortages that clearly reflect badly on central government policy.

Many have expressed skepticism of the recent announcement that China’s economy grew 8 percent real terms last year. And as if to confirm such skepticism, China’s Academy of Social Science recently announced its projection of only 5.3 percent real growth in the current year. What is more, Beijing’s turn to monetary and fiscal stimulus implies that even achieving that modest growth rate will require government help. Especially against China’s record of stupendous past growth, this low figure effectively announces that policy has taken a wrong turn.

Hints of just such doubts about basic policy emerged during last December’s Central Economic Work Conference. That important annual meeting saw considerable debate on how much economic and financial decision-making belongs in Beijing, and how much should reside with more independent economic actors, private companies, as well as state-owned enterprises (SOEs). The conference directive hints that not all the power lies with the centralizers. The December 2020 directive for 2021 noted “eight major tasks,” one of which clearly aimed at centralization. It stated the need to “bring order” to the allocation of capital. This past December’s directive for 2022 left this point out and spoke only of “seven major policies.”

Dissent has even appeared in major government media organs. As Asia Society President Kevin Rudd recently pointed out for The Wall Street Journal, Central Committee member Qu Qingshan in the People’s Daily recently made an unfavorable comparison between today’s centralizing tendencies and the economic opening introduced by Deng Xiaoping, concluding that “our modernization and socialism will be ruined.” He did not mention Xi’s policies, but the implication was clear. Similarly, Hu Wei, a leading member of the Party School in Shanghai, wrote in Liberation Daily, linking Deng’s “success” with the end “overcentralization.”

It would overstate to conclude that a movement against Xi is afoot or that he will fail in his attempt this year to secure his power for a third term or even for life. But it is nonetheless clear that recent shortfalls in China’s economic performance have brought discredit to Xi’s centralizing approach and may serve to limit this movement going forward.