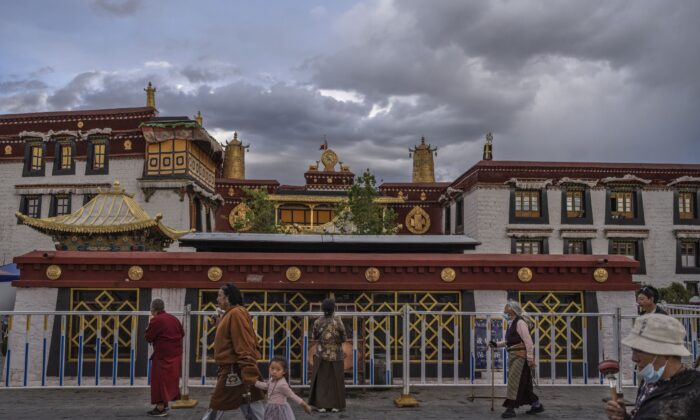 On the 70th anniversary of the Chinese Communist Party’s (CCP’s) takeover of Tibet, Chinese leader Xi Jinping visited the region and inspected a railroad project that has a strategic importance in “maintaining stability” along the Sino-Indian border.

Xi visited Nyingchi (also known as Linzhi) and the capital Lhasa from July 21 to 23, according to state-run media Xinhua. Nyingchi, a prefecture-level city that has a strategic location, borders Arunachal Pradesh of India.

Xi inspected a railroad construction project that runs from Sichuan Province to Lhasa, and took a ride in the Lhasa–Nyingchi railway line.

On June 25, Nyingchi made the news when the Chinese regime opened the first electrified railway in Tibet, the Lhasa–Nyingchi Railway, also known as the Lalin Line, according to a Xinhua report. The 270-mile rail line significantly reduces travel time from Lhasa to Nyingchi, as the railway has a maximum speed of about 100 miles per hour, the report said.

The Secretary of the Party Committee of Tibet Autonomous Region, Wu Yingjie, said during the opening ceremony that the railway plays an important role in “maintaining stability” along the China-India border.

Wu said that as a component of the Sichuan-Tibet Railway, the Lalin Line is a critical strategic project that Xi Jinping himself planned, deployed, and promoted.

The railroad would also be useful for the Chinese military for transporting equipment and supplies in the event of a border crisis between India and China, according to Beijing’s overseas mouthpiece Global Times.

Chinese authorities have been expanding airbases in at least 16 locations bordering India, including those close to Ladakh, Himachal Pradesh, and Uttarakhand, according to a July 23 report by India Today.

Last year amid the tensions in Ladakh, the Chinese authorities began building the Tashkurgan Pamir airport in the westernmost part of China. The airport is located in Xinjiang Uyghur Autonomous Region, bordering Tajikistan, Afghanistan, and Pakistan.

With its proximity to the China-Pakistan Economic Corridor, “the airport [Tashkurgan Pamir] is considered to be a critical strategic base for China,” India Today reported.

In recent months, India and China have built infrastructure along the border to support the troop surge. According to The Wall Street Journal, China has increased its military presence to at least 50,000 troops, up from 15,000 at this time last year; India has also deployed at least 50,000 additional troops to the India-China border. In addition, a significant military buildup is gathering in eastern Ladakh. The area overlaps with Kashmir and Tibet, making it an important strategic location.