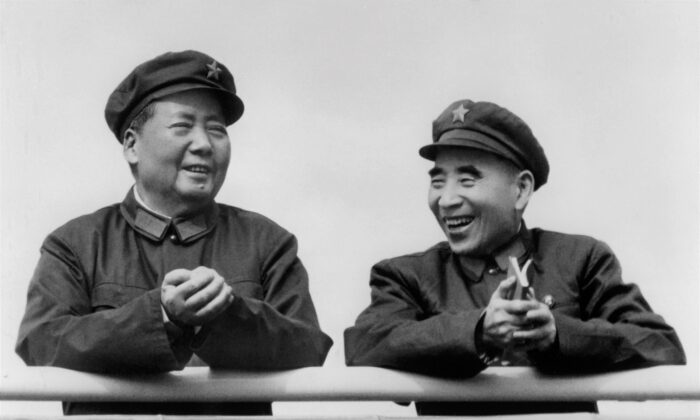 Before discussing what’s happening with Party leader Xi Jinping, we need to look at a similar situation in China’s history.

On Sept. 13, 1971, a plane crashed in Wendul Khan, Mongolia, killing all nine people on board. The Chinese Communist Party (CCP) said that Lin Biao, Mao Zedong’s successor, together with his wife and son, were victims of the deadly crash as they fled to the Soviet Union. Soon thereafter, the authorities further clarified that Lin had been planning a military coup to assassinate Chairman Mao.

Lin Biao had a notable military career during wartime and also played an important role as Mao’s right-hand man after the CCP seized power in China. In April 1969, when the CCP’s 9th National Congress adopted a new Party constitution, it named Lin as Mao Zedong’s “intimate comrade-in-arms and successor.”

Lin and his close followers in the military were therefore labeled a “counter-revolutionary group.” As a result, thousands of high-ranking military officials were purged. In addition to implicated subordinates, tens of thousands of military personnel were affected.

It is well known that Mao was paranoid and did not trust anyone. However, it remains unknown whether Lin indeed plotted a coup. Some insiders have published books about the incident, but no one can verify their statements.

Before Xi Jinping took over as head of the CCP, the Party had made some gestures to restore Lin’s reputation. For instance, in Chinese war movies produced in the 1990s, Lin was portrayed as a military genius. In the 2007 amended version of the Chinese Military Encyclopedia, Lin was described as “one of China’s 36 contemporary military strategists.” And in March 2008, state-run Xinhua News Agency published a commentary, saying Lin’s historical merits needed to be affirmed.

Lin was indeed the key strategist in several of the CCP’s decisive battles against Japanese troops and China’s national Kuomintang army, and was highly acclaimed for his military talents.

The Party Commands the Gun

However, on Sept. 16, the CCP’s leading theoretical journal Qiushi published an article condemning Lin for “plotting a military coup” in the 1970s. The article emphasized that the history of the CCP’s founding is about “the Party commanding the gun.” In other words, the Party has always controlled the military.

Although Lin’s main sphere of influence was in the military, the Quishi article stated that the reason Lin’s coup plot failed was that, “the entire People’s Liberation Army (PLA) resolutely listened to the Party and followed the Party’s instructions.”

The article also criticized Zhang Guotao, a founding member of the CCP, for “attempting to use guns to command the Party,” and another early CCP leader, Wang Ming, for advocating that every decision must be approved by the “United Front.” Zhang and Wang were both purged in the CCP’s political ideology struggles when Mao gradually rose to power.

The article was widely republished by other Chinese state media.

U.S.-based current affairs commentator Chen Pokong told The Epoch Times that the Qiushi article seems to suggest that right now there is likely a coup plan in the PLA, and the central authorities have great difficulty controlling the military. The article, when stressing that it is the Party that commands the guns, intends to warn the military that Xi, who is also the Chairman of the Military Commission, has the highest authority over the PLA.

Chong Sheng (pseudonym), an independent political commentator inside China, shares similar views. Chong told The Epoch Times that Xi has already purged many communist officials with allegiance to former Party secretary Jiang Zemin, and has been up against opposing forces inside the CCP all these years.