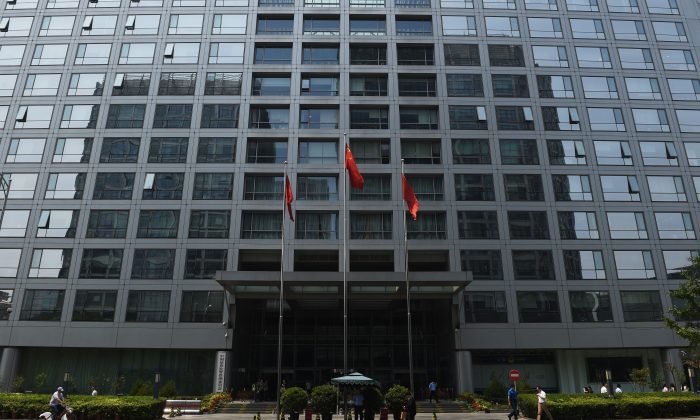 Zhu Yi, a former member of the Issuance Appraisal Committee of China Securities Regulatory Commission (CSRC), has recently been investigated. The purge of the financial system by the CCP chief Xi Jinping has further intensified after the Party’s crucial mid-term congress (the 6th Plenary Session of the 19th CCP Central Committee) in early November.

On Nov. 26, the website of the Central Commission for Discipline Inspection (CCDI) announced that Zhu Yi, former member of the Public Offering Review Committee and general manager of the investment banking department of Guotai Junan Securities Co., Ltd., has been investigated, highlighting Zhu’s status as a three-time member of the CSRC’s Main Board Public Offering Review Committee and a former researcher of the Shanghai Securities Regulatory Bureau (SSRB).

The CSRC’s Issuance Appraisal Committee is a special examination and approval body that has the power to determine whether an enterprise can be listed. The long queues of companies waiting for IPO approval over the past decade, with hundreds of IPOs backlogged each year, have also increased the power of the committee members. Apart from the CSRC itself, members of the committee also come from relevant funds, brokerages, investment banks, accounting firms, and law firms.

In January 2020, when the Xi administration purged the financial system, the exchange of money and interests between some members of the committee and listed companies, accounting firms undertaking the listing, law firms, as well as securities firms and funds were gradually exposed.

From May 2012 to September 2017, Zhu served as a member of the 14th, 15th, and 16th Main Board Public Offering Review Committee of the CSRC. In January 2018, a few months after stepping down from the committee, he joined Guotai Junan Securities as a senior executive in charge of the firm’s investment banking business.

Based in Shanghai—China’s financial hub—Guotai Junan Securities is one of the country’s largest securities firms.

Bank of Shanghai’s largest shareholder is Shanghai Lianhe Investment, founded and controlled by Jiang Mianheng, the son of former CCP leader Jiang Zemin. This information was revealed in January 2015 by the WeChat account of Beijing Youth Daily, an official newspaper of the CCP.

On its website, Pan-China Certified Public Accountants LLP states that among accounting firms with securities and futures qualifications, it ranks as the second in China—in terms of the number of listed companies it undertakes.

All three served three terms as members of the Public Offering Review Committee, working together from April 2014 to September 2017. That period was the most turbulent for China’s financial markets, with 2015 also seeing the biggest crash since the country’s stock market began in 1990, as the market plunged in less than a month, wiping out more than $3.13 trillion in market value and suspending trading in half of the listed companies.

The stock market crash has sent shockwaves through financial and political circles, and has been seen as a “financial coup” by anti-Xi forces.

On Sept. 16, six departments, including the CSRC, public security organs, procuratorial organs, and courts set up a coordinating working group to combat illegal activities in the capital market. The working group said it would “strengthen punishment of major cases” and specifically mentioned dual supervision of judicial and industrial sectors should be carried out on the listed companies involved. Two days later, the CCP’s Supreme People’s Procuratorate was officially stationed in the CSRC.

On Oct. 5, the CCDI also issued a notice that Zeng Changhong, a former first-level inspector of the CSRC Investor Protection Bureau, was under investigation. Zeng joined the CSRC in 1998 and was the real power figure who controlled the listing and issuance of enterprises.

After the stock market crash in 2015, Zeng was transferred to the Investor Protection Bureau as a first-level inspector, which in effect removed him from his real power. Li Liang, another deputy director who was also a real power figure behind the Growth Enterprise Market (GEM) audit, was expelled from the CCP and removed from public office after the 2015 stock market crash.

Chinese media, Caixin, described how the share price of companies listed on the GEM at the time were repeatedly pushed up, increasing the risk of sharp rises and falls: companies listed on the GEM were given a high p/E ratio when they were listed and sold wildly. After the IPO, they used the overcapitalization to acquire assets in the industry, using the real numbers to fill in the false numbers, making them more attractive to the market and pushing up their valuations even further.