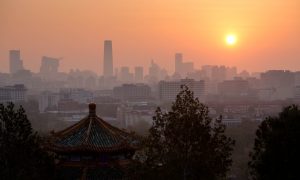 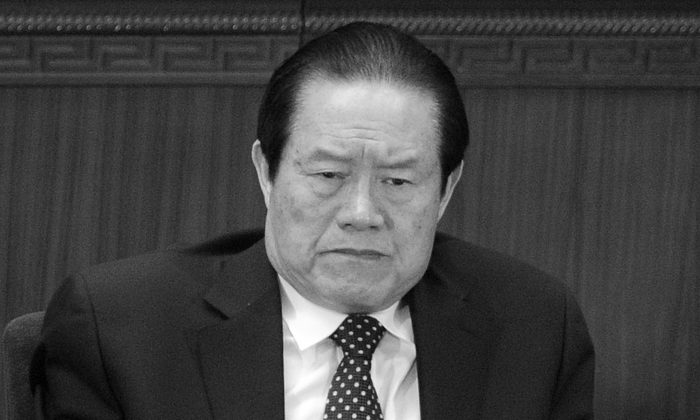 In a file picture taken on March 5, 2012, Zhou Yongkang, a member of the Politburo Standing Committee of the Chinese Communist Party, attends the opening session of the National People’s Congress at the Great Hall of the People in Beijing. Recent news reports in China suggest Zhou Yongkang may be indicted for corruption. (Liu Jin/AFP/Getty Images)
Opinion

Xi Jinping May Be Getting Ready to Bag a Tiger

It’s August, the time of year when the top leaders of the Chinese Communist Party gather at the northern seaside resort of Beidaihe to relax, enjoy the beach, and make the most important decisions about the Party’s direction.

The unofficial topic that everyone at Beidaihe is talking about is the upcoming trial of the disgraced former Politburo member Bo Xilai.

The case is a hot potato for the leadership, and Party head Xi Jinping has reason to be cautious. If the case goes badly, he will get the blame. If it goes well, former leaders Hu Jintao and Wen Jiabao will get the credit.

But recent developments may suggest Xi is willing to play for high stakes. Since the charges against Bo were announced at the end of July, a spate of news stories about Bo’s former co-conspirator Zhou Yongkang have appeared.

Zhou Yongkang, who was the domestic security czar for eight years, had dropped out of the news for some time. Is the Party bringing Zhou back into public view to set the stage for a judgment against Bo, or is Bo’s trial setting the stage for charges to be brought against Zhou?

Recent news reports suggest the groundwork is being prepared for trying Zhou Yongkang for corruption.

Zhou Yongkang’s son, Zhou Bin, takes care of the family business. On Aug. 3, the Guanghua Daily reported that Zhou Bin’s buddy Wu Bing was arrested at the Beijing West Railway Station trying to escape from Beijing. Wu Bing, besides being Zhou Bin’s buddy, is the man who launders the Zhou family money.

Sound of Hope Radio reported last week that, according to a source with information from inside the Public Security Bureau, Zhou Bin was arrested two months ago, which contradicts earlier reports that Zhou Bin had escaped to a foreign country.

While Zhou Yongkang may be tried for corruption, the real reasons for going after him will have to do with power.

On Feb. 10, 2012, four days after Wang Lijun, then Chongqing police chief and Bo’s right-hand man, sought asylum in the U.S. Consulate in Chengdu, The Washington Free Beacon quoted a U.S. official as saying, “Wang possessed invaluable knowledge of the current Chinese power struggle, and the efforts of the hardliners like Zhou Yongkang and Bo Xilai to upset the smooth succession of Xi Jinping.”

The following month, during the National People’s Congress, Zhou Yongkang was the only one from the Politburo Standing Committee who showed up at the Chongqing Party group discussion to show support for Bo Xilai. At the time, Bo was already at the center of rumors about a power struggle and a conspiracy.

During that meeting, when Bo tried to defend his “hit the black” campaign, which was said to be about targeting mobsters, he said the campaign was carried out under the leadership of the Political and Legal Affairs Committee (PLAC), which was headed by Zhou Yongkang.

There is no doubt that Bo and Zhou worked together, and Zhou supported Bo at the Politburo Standing Committee level. Insofar as Bo’s case is about the struggle for power inside the Party, it implicates Zhou Yongkang. But independently of Zhou’s entanglement with Bo, he has aroused strong opposition.

Over the past decade, up until the Party Congress in November 2012, the Political and Legal Affairs Committee had become more and more powerful. Its growth in power started with Jiang Zemin’s campaign against Falun Gong in 1999.

This extra-legal authority gave the heads of the PLAC, first Luo Gan, then Zhou Yongkang, enormous power over the years. During and after the Beijing Olympics in 2008, the “weiwen” (maintaining stability) system was enhanced and redefined.

The basic idea was to use the resources, manpower, experience, and tactics that had been accumulated during the persecution of Falun Gong against a much larger population and different groups.

Due to the ability the PLAC had to make policy independently regarding Falun Gong and stability maintenance, its endless financial support, the development of military and paramilitary forces, and personal ambition, Zhou Yongkang and his PLAC became the second center of power in the Party, alongside the central leadership.

The PLAC made enemies for two reasons. Throughout the CCP’s history, since Mao Zedong seized absolute power in the early 1940s, there had never been a second center of power. The CCP has never tolerated any sign of splitting the Party.

In addition, the mass violation of human rights carried out by Zhou Yongkang made him the most hated man in the Party, and the PLAC the most hated organization.

There is an unwritten Party rule that no formal charge or punishment may be brought against a member of the Politburo Standing Committee. Some people say the rule will be broken this time for Zhou, but others believe that the anti-corruption storm will stop before touching Zhou himself.

Xi Jinping’s anti-corruption campaign has so far been thunder but little rain. The behavior of a group of judges caught recently using prostitutes in Shanghai shows that Party officials are not taking Xi’s campaign seriously. To establish his authority, Xi Jinping needs to bag a real tiger.

As one of the “princelings,” the children of the founding generation of the Party, Bo was born with power. Many princelings, even though they don’t necessarily like Bo or Bo’s ideas, still have sympathy for him, as they also have benefited from inheriting power. They have a shared class interest.

Even though he is locked up, Bo is not short of supporters, inside and outside the Party, at different levels of the society. Zhou doesn’t have such a background or such an appeal.

Zhou was promoted by Jiang Zemin for one purpose and one purpose only—the persecution of Falun Gong. Once Zhou lost his position, he also lost his power and connections. Zhou became nobody, or even less than nobody. The current leadership can now use Zhou as the scapegoat for widespread human rights violations.

This past year, both Bo and Zhou have been out of the picture, but nothing they represented has changed. Mao’s theory is still part of the CCP’s heritage, and the strategy and tactics of maintaining stability are still widely used. The crimes of Bo and Zhou are the CCP’s crimes. If the purpose of trying Bo and indicting Zhou is to save the Party, no change should be expected.