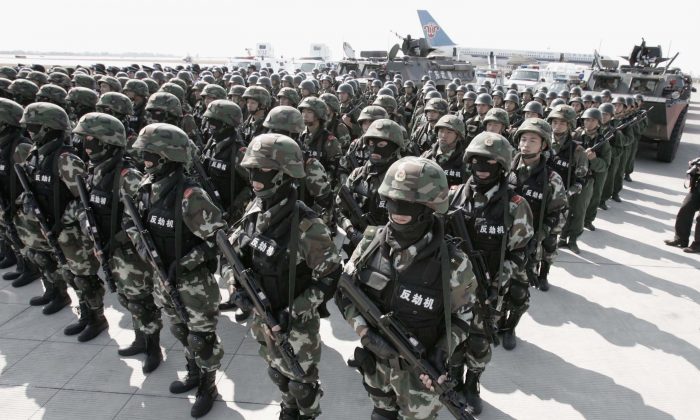 Troops from the People's Armed Police form up for an anti-hijack drill in Guangzhou City, China on Nov. 16, 2005. (China Photo/Getty Images)
China

Police in China generally aren’t allowed to carry automatic weapons—that is except for the People’s Armed Police. This paramilitary force is regularly mobilized by corrupt officials to carry out their dirty work—including forcefully seizing land from farmers, repressing Chinese dissidents, and attacking ethnic minorities.

But according to an insider at the headquarters of the People’s Armed Police in Beijing, a change may soon be coming. The leader of the Chinese Communist Party, Xi Jinping, is preparing to bring the force under his command in the next wave of his anti-corruption campaign.

With command of the paramilitary force, Xi Jinping would be another step closer to taking down Jiang Zemin, the former Communist Party leader who entrenched a culture of corruption in China and oversaw large-scale human rights violations.

The People’s Armed Police is still under Jiang’s faction, although his control over it was weakened by the arrest of a top ally, the former security czar Zhou Yongkang. Zhou was sentenced to life in prison in June 2015.

The paramilitary force has likewise been deeply tied to Jiang’s abuses and struggle for power. Communist Party officials mobilized local units in 2012 to intercept a defector and facilitate an attempted coup. Epoch Times has also reported that the People’s Armed Police, as well as other Communist Party organizations, were involved in hospitals that were using prisoners of conscience—often Falun Gong practitioners—as living sources for organ transplants.

The source in Beijing said various departments of the paramilitary force received notice that Xi will pass a legal amendment, proposed this March, which would place it under the regime’s military. The force currently reports to the military and the State Council.

Since Xi is the commander-in-chief of the military, the armed police would come directly under his command. Its shift away from the State Council would mean Chinese officials would no longer be able to leverage it for their own use.

A Fight for Control

In February 2012, a People’s Armed Police force from Chongqing surrounded the U.S. Consulate in Chengdu, where a man named Wang Lijun was trying to defect. Wang was the former henchman of Bo Xilai, the former Chongqing Party Secretary and a Jiang loyalist, who was behind the mobilization. On March 20, Jiang’s aforementioned security czar, Zhou Yongkang, appeared to position armed police troops near Zhongnanhai, the Chinese leadership headquarters, in a failed coup attempt.

In recent speeches, Xi Jinping accused Bo, Zhou, and other Jiang associates of being involved in political conspiracies to “wreck and split” the Communist Party. The proposed amendment, if passed, will greatly diminish the probability of another armed coup.

The source in the People’s Armed Police also said Xi has “essentially cleared out” elements belonging to the Jiang faction in the top leadership of the People’s Armed Police. He mentioned the investigation of Wang Jianping, a former paramilitary commander who was an ally of Zhou Yongkang. While there are no official announcements of a probe into Wang, the English-language Hong Kong newspaper South China Morning Post reported his arrest near the end of August.

The People’s Armed Police is officially tasked with border control and relief and firefighting work, as well as riot control and counterterrorism. The security force has over 600,000 troops, and is equipped with automatic weapons, armored personnel carriers, and helicopters.

When Zhou Yongkang was security czar from 2007 to 2012, the paramilitary troops were frequently mobilized to persecute practitioners of Falun Gong, a traditional Chinese spiritual discipline. In an updated report, researchers of organ harvesting in China found that several People’s Armed Police hospitals and doctors had participated in the grisly crime of forced organ harvesting.

Xi Jinping has reshuffled and purged many high-ranking personnel of the People’s Armed Police who came to office when Jiang was the dominant political figure in Chinese politics. Twelve top officers—11 major-generals and one lieutenant-general—were taken down in the past two years alone. And in the lead up to an important political conclave in October, overseas Chinese press reported even more purges at the top.

The information that Xi will soon exercise complete control over the regime’s paramilitary comes in light of a raft of probes and statements that appear to be aimed at laying the groundwork for a move against Jiang Zemin himself.