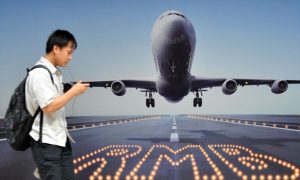 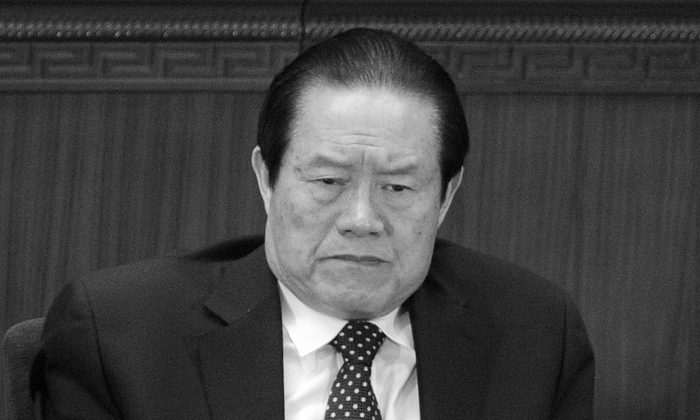 In a file photo taken on March 5, 2012, Zhou Yongkang, then a member of the Chinese Communist Party's Politburo Standing Committee, attends the opening session of the National People's Congress at the Great Hall of the People in Beijing. Media outlets were recently informed that Zhou has been the subject of an investigation. (Liu Jin/AFP/Getty Images)
China

The retired chief of the Chinese Communist Party’s powerful security apparatus is at the center of an investigation that has progressed quietly for months or over a year, and which has systematically taken down his underlings, protégés, and a former right-hand man. By making a target of so senior a cadre, the new leadership is thought to be consolidating its grip on power and eliminating resistance to economic reforms from certain constituencies in the Party.

The existence of the investigation against Zhou Yongkang was recently disclosed to English-language media outlets outside China, following a series of public statements by Party organs that it was investigating key personnel in the oil sector, an industry in which Zhou has deep roots.

The Epoch Times received news that Zhou Yongkang was a target for investigation as early as May last year. That the news has now been told to major Western media outlets indicates that the new leadership intends to make it “official,” according to political analysts.

In particular, the disclosures, and a series of new investigations, were made just after the trial of Bo Xilai, a former Politburo member, was wrapped up last week, indicating that the new leadership intends to maintain strong momentum in dismantling the power structures of the old guard.

The most recent target in the hit list leading to Zhou Yongkang was Jiang Jiemin, the director general of the body that oversees state assets. Jiang, who was appointed head of the state asset administration earlier this year, was previously president of the China National Petroleum Corporation (CNPC), the largest oil company in China.

Prior to that, four other CNPC officials had been taken down in a corruption probe. Zhou held top posts at CNPC, including as Secretary of the Party Group, during the 1980s and 1990s.

Zhou Yongkang’s political base is in the petroleum sector, which, like many other major economic sectors, is run by the state and allows the families and factions who control it to extract outsize rents. Chen Jieren, the nephew of former Politburo Standing Committee member He Guoqiang, told a U.S. diplomat that it was “well known” that “Zhou Yongkang and associates controlled the oil interests” in China, according to a Wikileaks cable.

Before the recent oil investigation, Zhou Yongkang’s network in the energy-rich Sichuan Province, where he once served as Party Secretary, had come under fire. The most high-profile case was the takedown of Li Chuncheng, the current Party Secretary of Sichuan, and a key figure in Zhou Yongkang and his son Zhou Bin’s state-business empire.

The leadership’s case against Zhou Yongkang is twofold, according to Shi Cangshan, an analyst of Party affairs based in Washington, D.C. “Originally, the leadership’s problem with Zhou Yongkang was a political one: he had grown out of control. Later, it was an economic one,” Shi said, referring to the Party leadership’s attempts to change China’s economic growth model, and the suffocating effect of state monopolies on the economy.

Party chief Xi Jinping has declared that he intends to go after both “tigers and flies,” a reference to both low-level and senior officials. A takedown of Zhou Yongkang would provide Xi with a useful pelt to hold up, to force the rest of the cadre corps into line as reform comes to the economy and its state-led model of growth, Shi Cangshan indicated.

The political question surrounding Zhou Yongkang extends back more than a decade, when enormous powers were given to the security apparatus, called the Political and Legal Affairs Committee (PLAC), that he used to head, and that the Chinese Communist Party uses to rule China with an iron first.

In 1999 the regime leader Jiang Zemin relied on the PLAC to carry out his unprecedented campaign aimed at “eradicating” the Falun Gong spiritual discipline, a traditional form of meditation that during the 1990s had attracted 70 million adherents, according to official figures from the time.

Jiang used a high-profile campaign against the peaceful group to consolidate his power and influence in the regime. In the course of his campaign, Jiang beefed up the domestic security establishment and appointed his own men to run it. The second of those officials was Zhou Yongkang, who in exchange for great power would continue to implement the campaign.

In the years following the launch of the campaign, the security forces were given vast budgets and greatly expanded capabilities. Mass protests also began occurring during this period, strengthening the case for an expanded domestic security capability.

The People’s Armed Police force, used to suppress protests, grew to around one million strong, the size of a standing army. Under Zhou Yongkang’s supervision, the security apparatus had become a “second center of power” in the regime, according to Zhang Tianliang, an analyst of contemporary China.

Bo Xilai, the Chinese official whose highly publicized trial concluded last week, was intended by Jiang Zemin and Zhou Yongkang to take the reins of the security forces from Zhou. After Bo Xilai’s former right-hand man, Wang Lijun, attempted to defect to the U.S. consulate in Chengdu in February 2012, however, all bets were off.

In the unfolding scandal that engulfed Bo Xilai and those close to him, Zhou was the only senior level official to defend him.

In March of 2012, word that a coup attempt had been staged in Beijing ricocheted around the Chinese Internet, and Epoch Times was informed by sources with ties to Party officials that Zhou Yongkang and Bo Xilai were involved.

Two months later, the Epoch Times was informed that Zhou was to be the target of a probe.

The investigation of Zhou Yongkang is unusual because it breaks a longstanding convention in the Chinese Communist Party that former members of the Politburo Standing Committee, which controls China, are immune from punishment after they leave office. Political analysts are as yet unsure whether it will be more or less conducive to stability around the central leadership.

Hua Po, a commentator on current affairs in Beijing, said in an interview with NTD Television: “If Zhou Yongkang and his network are like a big tree, then this movement by the Party’s leadership is to cut off and rip out the roots. Then the tree will simply dry up and die.”