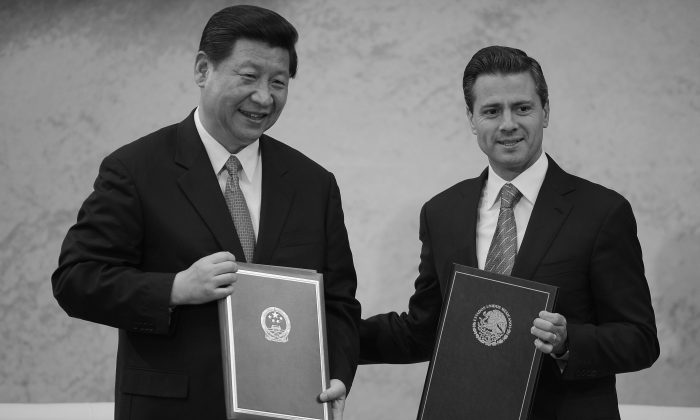 With an open checkbook and a respectful manner, Chairman Xi Jinping of the People’s Republic of China has been looking to expand Chinese influence and trade opportunities in America’s backyard.

His week-long series of summits has taken him from the Caribbean island nation of Trinidad and Tobago, to the Central American country of Costa Rica, and then to Mexico. On Friday he meets with U.S. President Barack Obama in southern California for two days.

As important as who Xi is visiting is who Xi is not visiting: communist Cuba, socialist Venezuela, or Venezuela’s close ally, Bolivia. This is the first time that a PRC chairman traveling to the Western hemisphere has not visited Cuba.

The political analyst Carlos Rajo told the Mexican station Radiofórmula that Xi’s snubbing of Cuba demonstrates how the PRC “want to be friends with the rest of the Americas, especially with the best friends of the United States, Mexico and Costa Rica.” In other words, Xi is putting the United States on notice that the PRC will have rising influence right next door to U.S. territory.

The visit to Trinidad and Tobago was framed partly in terms of the PRCs competition with Taiwan. 11 of the 23 countries that recognize Taiwan rather than the PRC are in the Caribbean and Central America.

The Chinese Communist Party mouthpiece People’s Daily quoted Xi Jingping as saying, “”The Chinese people will never forget that Trinidad and Tobago cast its vote in favor of restoring the lawful seat of the People’s Republic of China in the United Nations in 1971.”

While in Trinidad and Tobago, Xi held bilateral meetings with the leaders of Antigua and Barbuda, Barbados, the Bahamas, Dominica, Grenada, Guyana, Suriname and Jamaica, which the People’s Daily pointed out “are Caribbean countries with diplomatic ties with China.”

The small nations were rewarded, as during the meetings Xi promised US$3 billion in aid to the nine countries in the form of loans offered below cost, Trinidad’s prime minister told ABC.

The PRC’s ambassador to Trinidad and Tobago said the loans were “something that will be increased in the future,” according to ABC.

Xi’s manner charmed the Caribbean leaders. Dominca’s prime minister spoke approvingly of how Xi had “taken them seriously,” and Bahama’s prime minister felt Xi had treated him no differently than Xi would treat Barack Obama, according to Singapore’s Channel NewsAsia.

With the boom in natural gas production in the United States, Trinidad and Tobago’s number one market for its chief export is drying up. The expected completion of a widening of the Panama Canal in 2014 makes possible the easy shipment of liquefied natural gas to the PRC.

In Costa Rica, the only Central American country to recognize the PRC, the Xi visit offered more of the same. A promise of almost US$2 billion in infrastructure projects was forthcoming, including the refurbishing of an oil refinery (US$1.5 billion).

In Mexico, Xi has been seeking to refurbish a relationship that has come on hard times.

China’s exports (US$57 billion) to Mexico are ten times its imports (US$5.75 billion). Mexicans were insulted when the PRC quarantined 70 Mexican tourists in 2009 during the swine flu epidemic, even though none of them had symptoms.

The decision by Mexico’s President Calderon to meet with the Dalai Lama in 2011, led to a ban on importing pork to China from Mexico. A 2011 BBC survey found only 23 percent of Mexicans held a positive view of China.

The ban on importing pork was lifted as part of the ongoing summit, and a trade deal has been inked that promises $1 billion in new trade for Mexico to China.

Whether these measures will satisfy critics of the China’s trade practices is doubtful.

Julio Faesler, a former director of the Institute of Foreign Trade in Mexico, told the BBC that China’s exports compete directly with Mexico’s own manufacturing industries, and on an unfair basis.

Faesler hopes that Mexico’s President Nieto will be “very firm in expressing general dissatisfaction with sales of Chinese products at prices below cost, which is severely damaging many Mexican industries.” Mexico has filed four complaints with the WTO accusing China of dumping.

An editorial published by the Archdiocese of Mexico complaining of the PRC’s human rights record received wide coverage in the Mexican press. The editorial spoke of international complicity in a lack of freedom of expression and religious freedom, as the PRC “uses its economic and military power to pressure other countries.”

An article in the newspaper La Razón pointed out that the issues of human rights and free trade are connected: “That the Chinese government, which continues to violate laws against its own people, is going to be really respectful of a legal framework, cannot be believed. Having free trade with tyrannical regimes is always risky.”