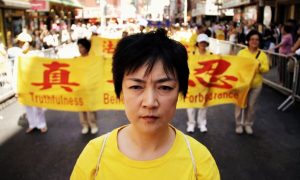 When Xi Jinping, the new chief of the Chinese Communist Party, in December 2012 said, “We must firmly establish, throughout society, the authority of the Constitution and the law and allow the overwhelming masses to fully believe in the law,” the remark meant quite different things to different people.

To liberal intellectuals and the netizen set in China, it meant beloved Article 35 of the constitution, which says, “Citizens of the People’s Republic of China enjoy freedom of speech, of the press, of assembly, of association, of procession and of demonstration.” Xi’s remarks gave them a handy fulcrum to apply in the media and on Sina Weibo, to insist on freedom of expression, and to push for the guarantee of basic rights.

But to the cold-blooded hard-liners in the Communist Party, it meant something more like the very comfortable Article 1: “The People’s Republic of China is a socialist state under the people’s democratic dictatorship. … Sabotage of the socialist system by any organization or individual is prohibited.” That’s another way of describing what were known in the 1950s as “counterrevolutionary crimes”: anyone who threatens the Party may be crushed.

These vastly different visions of contemporary China, and crucially, the Party’s place in it, animate the efforts of both groups to push their cases both inside the Party and in the sphere of public opinion—despite the regime being a dictatorship, the views of the public have made hard-won inroads into its decision making in recent years.

The process has been playing out most recently in a bewildering array of jargon-heavy ideological circulars, opinion articles, and internal directives that have been reported in the Chinese press in April, May, and June, as hard-liners attempt to strike out and gain ground against the general climate of enlightened opinion.

There was, for example, the “Notice on the current situation in the field of ideology,” issued by the General Office of the CCP Central Committee, and reported on May 8. It said that the Party had identified seven points of ideology that at the present time required “intense struggle” and whose “complexity” required “sober-headed recognition” from the rank and file. Grass-roots Party groups across the country were to study this and similar notices.

It is likely that the seven prominent issues there were the same as those identified as taboo topics, in a circular to university professors and administrators, reported just days later. These were: universal values, freedom of the press, civil society, civil rights, the Communist Party’s historical errors, crony elites, and judicial independence. Those are precisely the items on the agenda of liberal intellectuals, and now the Party was calling them strictly off-limits for discussion in university classrooms.

Following the internal notices were a series of editorials, beginning with a May 21 piece in Red Flag Manuscript, a Party journal, which called constitutionalism a “capitalist and non-socialist” idea, in its headline. Global Times, another official publication, which does its best to present molasses-like Party-speak in ordinary language, followed up by saying that “constitutionalism” (the word appeared in scare quotes, as if to emphasize its distastefulness) was a round-about way of negating China’s path of development.

Still more articles frothed up, some of them crossing the line into self-parody: Liu Yazhou, a political commissar at the People’s Liberation Army’s National Defense University, penned an article saying that “Party nature” for a Communist Party member was the same as “a pledge to God is to a Christian.” The piece continued to the effect that the Communist Party is God. Other pieces made similar points, and were widely ridiculed online.

But the ideological bombardment was a crucial opportunity for the hard-liners to interpret—or reinterpret, taking the narrative out of the hands of the liberals—Xi’s remarks about the constitution and rule of law, made at various points since late last year.

“The hardliners want to draw a line: no matter how far you want to go, you can never cross this line,” said Wen Zhao, a Canada-based political commentator with NTD Television, in a telephone interview. Wen appears several times a week in a program analyzing Chinese political developments. “They want to make things very clear, and to establish some facts on the ground to support their stance.”

Xi is, to some degree, stuck in the middle. He faces a slowing economy whose only hope for genuine and sustainable growth lays in increasing household income, and prying the state’s ubiquitous tentacles off parts of the economy; he also relies on the Party and its vast bureaucracy to actually carry out his policies.

If Xi throws his lot in with the intellectuals and “rightists,” as they are known in Party-speak, attempting to push through serious reforms to the communists’ monopoly on power, he runs the risk of becoming a Chinese Gorbachev. On the other hand, if he strictly follows the leftist hard-liners, “all the crises the Party is facing will get worse and worse, and in the next few years things will explode,” says Shi Cangshan, an independent analyst of Party affairs based in Washington.

“The CCP is right now facing many enormous challenges to its governance,” Shi said. “A big problem is that no one believes the Party: there are too many corrupt officials, and social rifts have become extreme. Xi Jinping sees these crises, and he wants to try to resolve them.”

The talk of constitutionalism and rule of law, then, was an attempt to throw the rightists a bone: years before, Party leaders would talk strictly about “stability.” One of Deng Xiaoping’s famous slogans was “stability overrides everything.” That’s an explicit statement that the law goes out the window. “But when you say ‘the law is supreme,’ it leaves it open to different interpretations,” Shi Cangshan said.

When asked about the meaning of all the ideological talk, political observer and activist Yang Jianli, based in Washington, D.C., said that Xi was “trying to curry to both the left and the right.” He fears three things, Yang says: a mass uprising, as popular discontent gets out of control; a split in the regime’s leadership; and an economic crisis. Xi is trying hard to balance these competing imperatives; and as time passes, the pressures build.

Some liberals, in fact, may have already lost hope in the Communist Party. That could mean that instead of trying to work with it to reform and change, they will increasingly struggle directly against it. If the idea caught on widely, the shift could be significant, and potentially perilous for the regime.

He Weifang, a well-known and highly regarded professor of law, spelled out the problem without even referring to the Party. In his Weibo post, later deleted (but preserved online), everyone knew what he was talking about.

“The value of Yang’s words,” Hu Weifang wrote, referring to the author of the Red Flag Manuscript piece, “is to clearly tell us not to hold onto any more illusions. It informs us what the real obstacle is to establishing a society based on the constitution. It also makes us reflect precisely on what we have avoided, in theory and practice, over the last 30 years of reform and opening up, and it tells us the source of all of society’s ills and corruption. It’s an incantation: as soon as they chant the theory of Marx, Engels, Lenin, Stalin, Mao, everything becomes a struggle between socialism and capitalism, from which escape is impossible.”