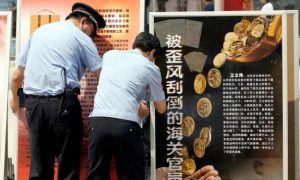 Very soon after Xi Jinping became head of the Chinese Communist Party, he began targeting corruption, and Party leaders of suspect loyalty found themselves under investigation. Now he is putting the military in his sights, and a new anti-corruption campaign is meant to make sure it obeys him.

China’s Central Military Commission (CMC) met Nov. 18-20 in Beijing to set up special inspection groups and train the groups’ leaders, according to regime mouthpiece Xinhua. The new groups’ mission will be to examine Party members who play leading roles in the military and the People’s Armed Police, the more than one-million strong force tasked with putting down domestic disturbances in China.

The inspection groups are to determine whether the military officials tightly follow the Communist Party’s discipline and principles, and whether there is abuse of power, bribery, corruption, bureaucracy and so on in the military, according to the Party mouthpiece People’s Daily.

The effort is being given a high priority. It will be led by the vice-chair of the CMC, Xu Qiliang, who said top officers will be especially targeted, according to Xinhua.

The new inspection groups are part of a broad-based effort by Xi Jinping to ensure his control over China’s military.

This month Xi has made several significant changes to the military leadership.

On Nov. 15, the CMC changed the commanders in Sichuan and Guizhou Provinces. On Nov. 18, the heads of Armed Police in Heilongjiang, Gansu, and Zhejiang provinces were also changed.

Political commentator Lan Shu told New Tang Dynasty TV that by making major changes in leading officials in the military and in local governments, Xi is breaking the pattern of interests and networks that are in place. Factions that might go against Xi’s authority lose their ability to do so.

Changing the top officers, though, does not ensure that the authority of Party central extends all the way through the military.

“Many of the heads in the central governmental departments have been changed. But lower officials in the provincial level and in local governments may not follow the new heads. Because different military regions have their own local interests.” Wu Fan, chief editor of the online magazine China Affairs, told NTD.

The new army inspection groups help Xi overcome those local interests. They are a bludgeon held over the heads of military officers at the local level.

“The purpose of this new inspection group is to give warning taps to the officials in local military units to let them advocate for Xi Jinping,” Hu Ping, chief editor of the online magazine Beijing Spring told Epoch Times in a phone interview, “It’s to tell local officials that if they don’t advocate for Xi, they may be sacked in an anti-corruption campaign.”

The Chinese Communist Party has worshiped military power and considered it the key in determining who rules since Mao Zedong’s time. Mao had a famous slogan: “Political power grows out of the barrel of a gun.”

Current leader Xi Jinping has shown he has grasped this point. In a change in recent precedent, Xi became the chairman of the Central Military Commission of China immediately upon becoming head of the CCP.

“Xi Jinping is the first one to seize the real power over the Party and military in such a short time since Deng Xiaoping,” said Heng He, an Epoch Times columnist who writes on China’s politics.

“The CCP’s power system is not democratic. It’s neither supported by public opinion nor by the system,” the Beijing Spring editor Hu Ping said, “Therefore, deciding who gets the political power often depends on how much military power and armed police you have, especially in Beijing.”

“If one has that military power, no other central CCP members dare to interfere when you host a meeting or make any decisions,” Hu said.

While the new inspection groups are meant to ensure Xi Jinping enjoys undisputed control of the military, don’t expect to read about their activities in China’s state-run press.

Central Party School professor Zhang Xixian told the Party mouthpiece Beijing Youth Daily that the secrecy of the army inspection group is even stricter than that of the central inspection group. The inspection’s results probably won’t be published, Zhang said.

The army inspection will be launched by the end of this year, Xinhua reports.