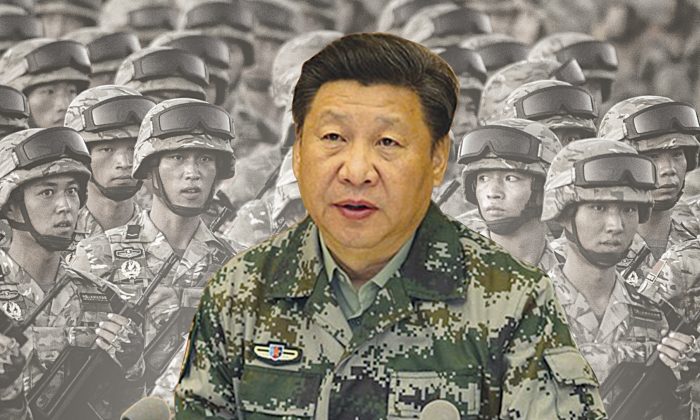 Xi also visited the centre as commander-in-chief for the first time, which caused concern. Wearing a camouflage uniform, Xi listened to reports on the JCH as well as the sub-JCH in five theaters through videos.

He appeared together with other members of the CMC. Unlike other officials and soldiers, his armlet only had CMC wording on it.

This was the first time Xi appeared as commander-in-chief of the JCH after the military reform late last year.

The JCH is an important authority set up after China’s military reform. It is the highest and key command centre of the Chinese People’s Liberation Army (PLA), where all military orders and dispatches come from.

Last year, the Ministry of Defense (MOD) said that the military reform would “fix JCH authorities” and “build up the strategic and operational command system.”

The JCH is defined in two levels, with one at the level of the CMC and another at the theatre level. Some analysts have said that as the brain of the Chinese military’s joint operations, the JCH of the CMC has always been strictly confidential and low-key since it was set up.

Since the end of last year, when Xi started the military reform, the old Departments of General Staff, General Politics, General Logistics, and General Armament have been changed to 15 functional departments, including 7 departments, 3 committees, and 5 direct institutions. In addition, 7 military districts were changed to 5 theatres.

Changes to the senior military personnel have been basically completed.

Similar to the old “Chief General”, the current commander-in-chief of the JCH is the person who issues military orders.

Under the current military system, the chairman of the CMC is a military and administrative top commander who holds the power of four military systems in command, construction, management, and supervision.

According to the old system, military orders were primarily dealt by the General Staff Department. The chief of the department then submitted them to the vice-chairmen and then the chairman of the CMC.

The chairman of the CMC is the concurrent commander of the current round of military reform.

Supporters of former leader Jiang Zemin, Xi’s political rival, have controlled the military for a long time. Jiang himself was chairman of the CMC from 1989 to 2004.

Jiang promoted Guo Boxiong and Xu Caihou to be vice-chairmen of the CMC to hold military power before he retired in 2004, while Jiang himself remained the chairman illegally for two more years. Jiang maintained his grip on military power for over 20 years altogether, cultivating many cronies and supporters in the army.

When Jiang toppled Yang Shangkun, former vice-chairman of the CMC in 1989, and his brother Yang Baibing, former director of the General Political Department in 1992, Jiang’s faction began to control the army.

Xu Caihou, nicknamed “Northeast Tiger,” and Guo Boxiong, nicknamed “Northwest Wolf,” both controlled an area in the military for more than 10 years, with confidants and partisans at all levels throughout the army.

According to an inside source, Guo once said, “If we were replaced, there would still be our men at next level.”

According to a Mainland media report on April 12 this year, many of the current military officials were promoted by Guo during his 10-year post as vice-chairman of the CMC. Guo’s son, Guo Zhenggang, said, “More than half of the army cadres were promoted by my family.”

Xu died of bladder cancer during prosecution March 15 last year. According to last June’s Ming Pao Monthly report, Xu made two statements in his last moments: that Guo’s problems were much more serious than his, and that only four people among the chief generals of large military districts did not bribe him.

Previously, overseas media have disclosed that Guo and Xu traded rankings in the military. Guo and Xu firmly held the power over military personnel and monopolized almost all promotions of high-ranking military officials.

Yang Chunchang, vice-director of the former Military Construction Department of the Military Academy, disclosed on Hong Kong’s Phoenix TV on March 9 last year that Xu had price tags on military rankings. The military-district levels started at 10 million yuan (US$1.5 million).

“In the army, including the armed police and the PLA, joining the Chinese Communist Party (CCP) also required money,” Yang told Phoenix TV. “There were always price tags for rankings from platoon, company, and regiment to division.”

Yang added that for a commander of a big military district, if one person gave him 10 million yuan and another gave him 20 million yuan, the one who gave more money would get the position.

“The military belonged to their family. They also oversaw the then-leader of the CMC. These were all very complicated issues,” Yang told Phoenix TV.

According to the CCP’s promotion system for military personnel, a senior general’s promotion must be granted by two CMC vice-chairmen.

China’s Communist System on the Verge of Collapse

Xi began his anti-corruption campaign and military reform after he took office. Most of those investigated in the campaign have been members of Jiang’s faction.

So far, 57 officials at the corps level and above have been sacked, including Jiang’s two henchmen, Xu and Guo, and their henchmen.

Through restructuring and a substantial personnel adjustment during the military reform, Xi has gained full control of the army.

Commentators have said that Guo, Xu, and their cronies have been gradually thrown out or marginalised. However, their partisans in the military are still difficult to clear out comprehensively.

Xi has won the power to give military orders. This warned the forces of Guo and Xu in the army, laying a foundation for cleaning out Jiang’s remnants in the military and arresting Jiang in the next step.

On Feb 1, the inaugural meeting of the five newly formed military theatres was held in Beijing. Xi granted each theater a bull flag and gave a speech.

Ji Da, a China expert based in Washington DC, said that the CCP military is commercialised. The army used its own businesses to raise money, starting as early as the Yan’an period in the 1930s and 1940s. The Chinese military’s enterprises are still very active.

During Mao Zedong’s era, commanders of large military districts would swap positions every few years to prevent separatists from expanding their power and to consolidate Mao’s absolute control of the army, Ji said.

Ji told Epoch Times that through the recent military reform, Xi replaced Jiang’s faction in the military with a group of his own men. However, they haven’t built up prestige in the military yet.

Right now it is difficult for anyone to build up a reputation in the military, because officials and soldiers of the army are all disappointed and losing confidence in the army. Ji added.

“At a critical time in the battle between Xi and Jiang, Xi had to take control of the JCH to ensure his absolute control over the army after he experienced several assassination attempts,” Ji said.

Ji points out that from Xi’s move of taking over the JCH, we can observe not only a big split from top to bottom within the CCP, but also the fierceness of the wrestling between Xi and Jiang.