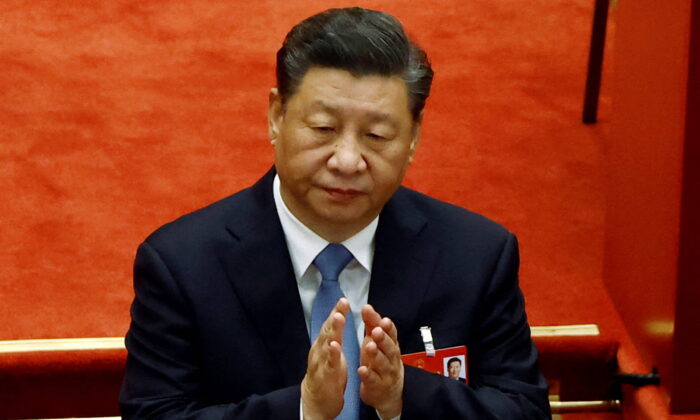 Chinese leader Xi Jinping applauds at the opening session of the National People's Congress (NPC) at the Great Hall of the People in Beijing, China, on March 5, 2022. (Carlos Garcia Rawlins/Reuters)
Thinking About China

Sometimes Chinese leader Xi Jinping seems determined to cut China off from western involvement and the technologies that have contributed to China’s economic miracle. The list of impediments to this important source of development is long. The latest addition is Beijing’s decision to require foreign firms in China to host communist party cells within their management structures and give those cells power to make business decisions. By adding to the list of burdens imposed on foreign investors Beijing seems to have decided, though no doubt inadvertently, to impose yet another impediment to the country’s economic prospects.

The list of development hurdles keeps growing. At the top is Beijing’s growing insistence on a more centralized direction of economics overall, an act that cannot help but stifle economic dynamism.  The list also includes Beijing’s reluctance to take steps to reduce China’s dependence on foreign buying by weaning the economy from its export focus. For more detail on these issues, see this discussion. Beijing has also taken steps to deny Chinese business the help of western financing sources, especially critical now that China faces a huge debt overhang of its own. For detail on this matter, see this article and this one. The latest rule requiring party cells just adds to the list.

The communist cell mandate has emerged from the China Securities Regulatory Commission, the equivalent of America’s Securities and Exchange Commission (SEC). It would require foreign-owned fund managers, only recently invited into China to presumably enhance that country’s financial sophistication and technology, to accommodate communist party cells when operating in China. Stated in this way, the imposition seems narrowly focused, perhaps because these fund managers seem to have been excused from the requirement to partner with a Chinese firm. But indications are that this may not be the end. For some years now, talk has circulated about imposing a more general rule of this sort on all foreign businesses operating in China, most of which already have a Chinese partner.

Although issued through China’s securities regulator, the rule reflects a September 2020 statement from the General Office of the Communist Party’s Central Committee. In the clumsy prose so typical of communist governments, it is entitled: “Opinion on Strengthening the United Front Work of the Private Economy in the New Era.” As stated, the effort seems to aim at increasing the influence of the party in business decisions. It is still not entirely clear how this effort will influence decision-making in foreign firms, but an indicator lies in how several Chinese firms, and not necessarily state-owned, have instructed their boards to “seek the opinion of the leading party group of the company” before making any significant decision.

American and other foreign firms in China have long chafed at interference from their Chinese partners and Beijing. Their top complaints concern how Beijing insists that any foreign firms operating in China have a Chinese partner and transfer to that partner all technology and business secrets. Such rules and the complaints of American firms have already impelled the U.S. Congress to consider legislation to limit American involvement in China. For more detail on this matter see this discussion. So far, American fund managers entering China have failed to comment, but it is hardly a stretch to imagine that few managements would be happy consulting a party cell about business decisions. Many may decide that Chinese exposure is nonetheless worth the bother. Even then, managers will worry about legal ramifications in the United States. Managing funds at the direction of in-house communist cells might prompt American shareholders to claim a breach of management’s fiduciary obligation to act solely to their benefit.

Alone, this new cell requirement is probably not enough to tip the scale against foreign businesses and even fund managers seeking Chinese exposure. Fund managers could find ways to sidestep fiduciary liabilities. But along with the increasing list of other burdens imposed by Beijing, many foreign firms may reconsider the benefits of Chinese exposure. That would work against China’s economic interests. Even Xi’s New Development Concept (NDC) recognizes the value of foreign ventures and otherwise encourages them. For more on this see this article. It is becoming apparent that China’s leadership is either working at cross purposes or more likely is following a true believer approach to communism regardless of how it hurts economic development.