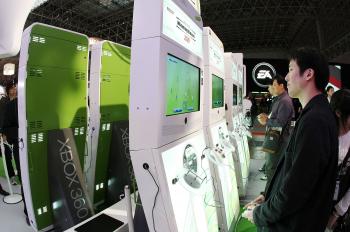 In this file photo, visitors try out games with XBOX 360 at Microsoft Booth in Chiba, Japan. Microsoft is raising prices for its XBox Live service. (Junko Kimura/Getty Images)
News

Ram Srinivasan
View profile
Follow
biggersmaller
Print
Microsoft is raising the prices on the "XBox Live" Gold premium online service that allows users to game against each other online, but the move has caused furor among XBox Live Gold users online.

The software behemoth announced that it would add a $10 premium to its service in the United States starting November 1, raising the price from $50 to $60 for its annual service. A three-month service is going up from $20 to $25, while a monthly subscription is going up rom $8 to $10.

Prices are also being raised for users in the U.K., Canada and Mexico. But Microsoft is allowing current users to be able to renew their subscriptions for a discount before November 1st, allowing them to get a one-year membership for $40.

The changes to the price structure were announced by Director of Programming for "Xbox Live", Larry Hryb, who is known by his handle, "Major Nelson," online.

Users of the service were critical of the price changes for the service, particularly Microsoft's policy of charging for user-to-user gaming. Matt Peckham of PC World wrote, "Sony's got Microsoft beat hands down, offering its PlayStation Plus service with premium content for $50 a year while wisely keeping multiplayer on the free side of the pay wall—as it's been for decades and remains for PC gamers, MMO's notwithstanding."

Several gamers were irate at the price hikes. On CNET, one user complained, "Why the price hike? What are we getting for shelling out the ten extra bucks?," while another user commented on Twitter, "So, with the increase of Xbox live, you'll see me getting a PS3 soon."

Console gaming industry leaders such as Microsoft, Sony and Electronic Arts, have been recently introducing or increasing subscription or service prices offered to gamers in order to increase revenue.