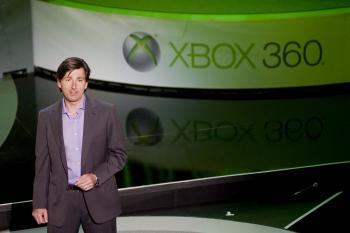 KINECT SUCCESS: A Microsoft executive announcing the launch of the XBox Kinect. The Kinect has sold out across the United States just two days after its launch. (Michal Czerwonka/Getty Images)
News

XBox Kinect Sells Out in US, Could Sell 5 Million Units This Year

Microsoft's XBox Kinect game controller is off to a strong start, selling out in stores across the United States just two days after its launch on Nov. 4.

The launch of the software giant's first major game controller is well-timed, as the XBox became the most popular gaming console in the United States this quarter. XBox is one of the many successful products that helped fuel Microsoft to record profits for its Q3 earnings.

The XBox Kinect is a game controller that allows gamers to control the XBox device with their body movements and voice. The gaming unit detects motion and voice, allowing the gamer to move and take action in the virtual game.

With the successful launch, Microsoft announced today that it was clocking up Kinect sales projections for the year from three million to five million units.

Two weeks before the launch, Microsoft started a massive marketing campaign called "You are the controller" to promote the Kinect to its millions of XBox customers.

Microsoft also transformed Times Square on Nov. 3 into an event launch for the Kinect, with a full day of "demos, star-studded appearances and a massive, choreographed dance routine," according to the company's press release.

Microsoft said 17 Kinect-specific games would accompany the controller launch, four of which were made by Microsoft itself.

Despite Kinect's success, Microsoft continues to compete for the number one position of the most popular gaming device.

After finally coming out on top, the XBox has Sony's Playstation and Nintendo's gaming devices nipping on its heels. A European survey conducted by GameVision Europe and Kelkoo listed Playstation 3 as the top-selling game device this Christmas, with the XBox as a distant third.

Microsoft said in its latest press statement that there are "45 million Xbox 360 consoles currently in homes worldwide."