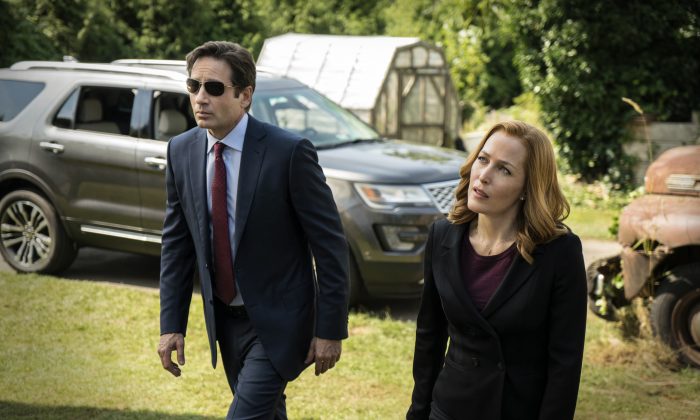 LOS ANGELES—”The X-Files” creator Chris Carter is pleased to update the original template with his 21st-century unease. Gillian Anderson and David Duchovny are glad to be playing opposite each other again as Scully and Mulder.

And admirers likely will do a happy dance to the Fox TV drama’s eerie theme music as it returns with a six-episode limited run.

The two-part opener is scheduled to air at 10 p.m. EST Sunday, immediately after the end of the NFL’s NFC championship game on Fox, and at 8 p.m. EST Monday. Subsequent episodes also air at 8 p.m. Monday EST.

Will the reboot retain the dark magic of the original TV series, which in its 1993-2002 lifespan offered a wildly entertaining blend of government conspiracies, otherworldly suspense and black comedy that was placed in the hands of two unknown but charismatic actors?

Creator and executive producer Carter offers assurances, but with the caveat that he insisted on more than an exercise in nostalgia for the franchise that included two big-screen movies.

“Someone said to me, ‘Great, a victory lap,'” when the new project was announced, he said. “That’s the opposite of why we came back. We didn’t want to do something that reworked old material or was just a sequel to what we’d done before. I wanted to make something fresh and original.”

“These are interesting and heady times, and perfect for telling ‘X-Files’ tales,” he said, promising a series more directly topical than the original. “We deal with fear in a lot of different ways. … The fact that we’re being spied on and don’t seem to be raising any protest is a frightening prospect for me.”

One tricky aspect is balancing the interests of “X-Files” devotees and potential newcomers.

“We have to be respectful of people who are familiar with the show so we don’t beat them over the head with things they know,” Carter said. “I think our approach is artful in what it gives fans and what it will provide non-fans.”

He’s joined in the cause by members of the creative team that helped make the first series a sensation, with Darin Morgan, Glen Morgan and James Wong splitting writing and directing duties with Carter on the new episodes.

Also back are Mitch Pileggi, who played FBI assistant director Walter Skinner in the original series; William B. Davis as the shadowy Cigarette Smoking Man; and, despite their deaths, the beloved conspiracy-theory geeks known collectively as the Lone Gunmen.

“No one is every truly dead on ‘The X-Files,'” Carter said, drolly.

Newcomer Joel McHale is onboard as Tad O’Malley, a news anchor.

In the first go-round, FBI agent Fox Mulder was driven to prove the government was hiding evidence of aliens on Earth. Fellow agent Dana Scully was his initially skeptical colleague.

In the reboot, new evidence reunites them in the quest to uncover the truth. It’s personal as well, Anderson said.

“There’s something that’s missing in Scully’s life, and that thing is clearly Mulder. Both of them feel disconnected from the world and themselves because they’re missing a limb,” she said.

She and Duchovny have moved on to a variety of on-screen and other projects, including writing (both have published novels), and, in Duchovny’s case, music. But they said returning to the “X-Files” fold, with Carter again in charge, felt right.

“Chris is a serious person and an artist. And if he says he’s got a way to make it work, I trust that,” Duchovny said.

Said Anderson: “There were aspects of it that felt ridiculously familiar and kind of felt we never left. Some elements were much more challenging — running in heels,” she added, laughing.

Last summer’s taping in Vancouver, Canada, was arranged around her London-based family life. But she brought part of it with her: daughter Piper, who is studying production design, was on the set to gain work experience and ended up contributing to the series, Anderson said.

Whatever work-related tension that existed between the stars, the by-product of churning out some two-dozen episodes a season and becoming instant stars, is long gone, Duchovny said.

“Put any human being in that situation, working the amount that we worked and going through the ride from obscurity to global (fame), it’s just crazy-making,” he said. “It’s a natural human emotion to have enough of one another in that situation. Now it’s quite the opposite, it’s respect and love and gratitude.”