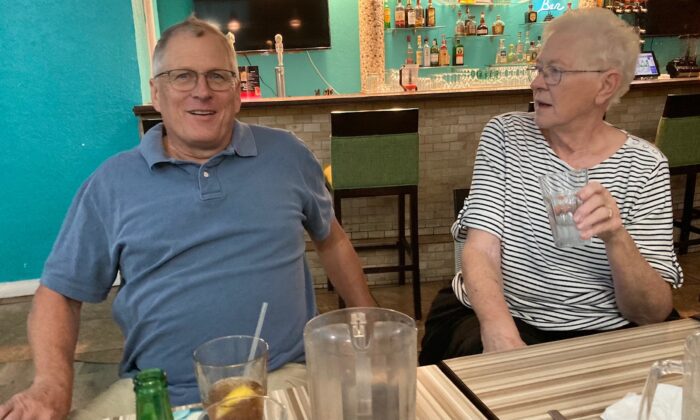 Sweetwater County Democratic Party precinct nominees Mark Kot (L) and Barbara Smith say they can’t switch parties in Wyoming’s Aug. 16, 2022, primary to vote for embattled Rep. Liz Cheney (R-Wyo.), but they know many fellow Democrats who are doing just that and have been casting ballots in Republican primaries for years because they want “their votes to count.” (John Haughey/The Epoch Times)
2022 Midterm Elections

Many Wyoming Democrats will tell you openly that they’re switching parties on Aug. 16 to cast their ballots for Cheney in her GOP U.S. House primary against Fort Laramie land use-water rights attorney Harriet Hageman.

But few think it will matter.

Hageman, who has been endorsed by Trump, leads Cheney by nearly 30 percentage points—57 percent to 28 percent—with 41 percent saying that they’re voting more against Cheney than for Hageman, according to a University of Wyoming survey released on Aug. 11. The poll of 562 likely primary voters was taken July 25 to Aug. 6.

Unless Cheney has a stealth reservoir of support—“quiet Republicans,” she called them recently—within the GOP, there aren’t enough Democrats or, for that matter, enough non-Republicans, to have much efficacy in the state.

Math confirms the veracity of polls that show a very narrow path to a third term for Cheney, who enraged many Wyoming Republicans for voting to impeach Trump, serving as co-chair of the House’s Jan. 6 House committee, and being among Trump’s most severe, unrelenting critics.

Of 284,557 registered voters on Aug. 1, 207,674 were enrolled as Republicans, according to the Wyoming Secretary of State’s Office. There were 39,753 registered Democrats and 33,769 registered as unaffiliated, with about 4,000 registered with third parties.

In January, the Secretary of State’s Office documented that there were 280,741 registered voters with 196,179 signed on to the Republican Party, 45,822 registered as Democrats, and 35,344 registered as unaffiliated.

Earlier polls indicate about 70 percent of the state’s Republicans support Hageman over Cheney. According to some estimates, the embattled incumbent would need at least 40,000 votes from non-Republicans to make up that interparty difference.

“We see some movement from registered Democrat to registered Republican,” Wyoming Democratic Party communications director David Martin told The Epoch Times regarding the past few months. “But we don’t believe it will influence the GOP (primary) as much as people think it will.”

At a weekly gathering of about a dozen Sweetwater County Democratic Party committee members at Los Cabos restaurant in Rock Springs on Aug. 12, there was no cabal or orchestrated plan to vote for Cheney—just people who say they want their vote to count in a state that’s overwhelmingly dominated by the Republican Party.

Carolyn Molson says that instead of asking for a Democratic ballot on primary day, she’ll request a Republican one “because we have no voice as Democrats and no power” in the state.

Wyoming is one of six states where primaries are “partially open,” meaning that voters in one party can vote in another party’s primary if they register with the party before casting a ballot.

Therefore, under Wyoming law, voters can change parties on primary day by registering with the party they want a ballot for. If the state’s GOP-dominated legislature wanted to change that law, it would. But it shot down a proposal to close the primaries during its 2022 session so, obviously, a majority of lawmakers see “crossover” voting as a benefit to them.

“There are a lot of people trending in this direction,” Molson said. “I’m not going to be [a Republican] in the general election.”

Tom Gagnon, a writer whose opinion columns are published locally and across the state, has already done the deed by voting early.

“I voted for Liz,” he said. “This is the first time in my life that I’ve voted as a Republican. Unless things change, I’m going to stay a Republican” because, in Wyoming now, the state’s battles are being fought within the Republican Party.

Leesa Kuhlmann is running for the state senate as a Democrat. But on Aug. 16, she’s registering as a Republican and getting a Republican ballot.

“The people of Wyoming should be proud [of Cheney],” Kuhlmann said. “I don’t agree with her politically but at least I have respect for her. She has a conscience. You have to be proud of her.”

But they were the outliers in the group. Most were sticking with Democratic candidates, regardless of their chances to win in a general election.

“Crossover? No,” said Norma Prevedel, who, along with her husband Frank Prevedel, who served as a Democratic state senator representing Sweetwater County for 14 years, has already voted.

Barbara Smith and Mark Kot are also sticking with the Democratic Party when they vote on Aug. 16. As nominated Democratic precinct committee members, they can’t register outside the party.

Smith, a career educator and poet, said Wyoming crossover voting has gained a lot of national attention, but it’s the only way for Democrats to appeal to Republicans during elections.

“It’s not just about Cheney,” she said. “All these people in Sweetwater County” who are Democrats want Republicans to recognize they exist.

“If you want your vote to count,” crossover voting is a wedge that can help make that happen, according to Kot, a retired Sweetwater County planner who serves as the chair of the Wyoming Water Development Commission, despite being a Democrat.

Martin said as Republicans rip into each other in primary battles between Trump-endorsed or Trump-supporting candidates and “RINOs”—Republicans in Name Only who seek to shift the party’s core values to accommodate more of the left—the Democratic Party will remain “a big tent” that, in Wyoming, has a lot of available seats.

Democrats in Wyoming have traditionally been associated with unions, stemming from the Union Pacific railroad and coal mining industries in Sweetwater and Campbell counties.

Now, the only places in the state where Democrats are competitive are Teton County, with its resort town of Jackson, and Albany County, which includes the University of Wyoming in Laramie, Martin said.

Wyoming’s Democrats still represent “the blue-collar values” of the state’s workers and are as conservative on many issues as Republicans, he said.

“You got to go to Laramie to find the ‘woke,’” Martin said.

And that’s another evolution in the disappearing Democrats of Wyoming.

Before the turn of the 21st century, there were two Democratic bastions in Wyoming—Rock Springs and Green River in Sweetwater County, and Gillette in Campbell County, where unionized railroad workers and miners were aligned with the Democratic Party.

Wyoming lawmakers adopted a “Right To Work” law in 1963. But a series of 1990s amendments by the Republican-controlled legislature turned the state into one of the most hostile in the nation to organized labor.

“The unions are gone,” Frank Prevedel said. “The ‘Right To Work State’ killed the Democrats in Wyoming.”

Even with unions no longer being a factor, Sweetwater County remained a Democratic stronghold until about a decade ago, Prevedel said. He noted that 10 years ago, there were about 7,500 registered Democrats and about 4,500 registered Republicans in the county.

The already outmatched party began losing members not in response to issues within the state, but because of the Democrats’ national platforms that grew too liberal for many in Wyoming, according to Prevedel.

“I think two issues have converged to really hurt Democrats in Wyoming—gun control and the fight about coal,” he said, noting that he knows many who left over the gun issue, which was never the view of Wyoming Democrats—many being gun-owners themselves in a state of gun-owners.

But shifts come and go over time, and if the Democratic Party swung too far to the left for many Democrats, then the Republican Party appears to now be swinging far to the right, Kuhlmann said.

Read More
Elon Musk Says Democratic Party Has Been ‘Hijacked by Extremists’
Democrats ‘Would Rather Tesla Was Dead Than Be Alive and Non-Unionized’: Elon Musk

And many Republicans she knows are growing uncomfortable with the party. She said she believes that Democrats will become a force in Wyoming and in other red states

“I’m very optimistic,” she said. “I think there is lots of room here for the Democratic Party. Right now, it’s not jelling.”