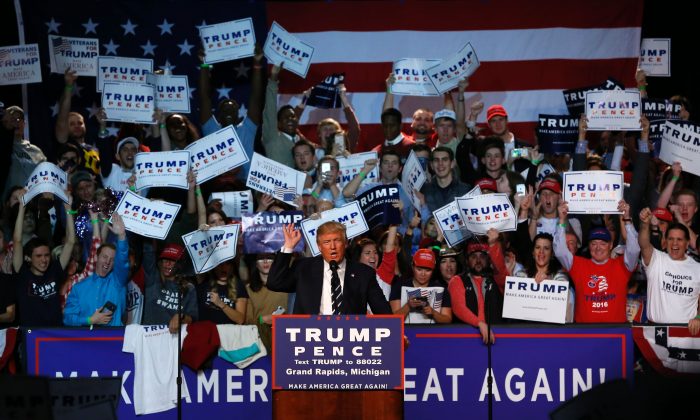 Donald Trump addresses the final rally of his 2016 presidential campaign at Devos Place in Grand Rapids, Mich., on Nov. 7, 2016. (JEFF KOWALSKY/AFP/Getty Images)
US

CHEYENNE, Wyo.—Republican Donald Trump secured Wyoming’s three electoral votes without the disruption or protests seen in other states, although one elector complained about being harassed by emails and telephone calls trying to get him to change his vote.

“It was real obvious it was a concerted effort by groups across the country to disrupt and disenfranchise the vote of the people,” elector Karl T. Allred, of Evanston, said.

Allred and two others formally cast their Electoral College votes on Monday during a 22-minute proceeding at the Wyoming Secretary of State’s Office while Gov. Matt Mead and about two dozen others watched.

The voting was mostly ceremonial because state law does not allow electors the freedom to cast their vote for anyone but the candidate who won Wyoming’s popular vote in the presidential election.

Trump easily beat Hillary Clinton, winning about 70 percent of the Wyoming vote in the election.

The Electoral College has 538 members, with the number allocated to each state based on how many representatives it has in the House plus one for each senator.

While the Electoral College is normally a mundane process, it hasn’t been so in this highly charged election year. In some state capitols around the country, protesters gathered to urge Republican electors to abandon Trump.

There were no protesters in Cheyenne on Monday, but Mead drew laughs when he addressed the Wyoming electors and noted that “you probably had some opinions shared with you.”

Allred, who had never before been an elector, said he didn’t mind talking about his vote but the emails and phone calls reached a level that he considered excessive.

In addition, those contacting him seemed not to understand the Electoral College process set out in the U.S. Constitution, he said.

“The biggest thing that came to me through this whole process is how much the general public does not understand the way our country works,” Allred said. “They don’t understand basic tenets of our government. And to me that’s scary.”