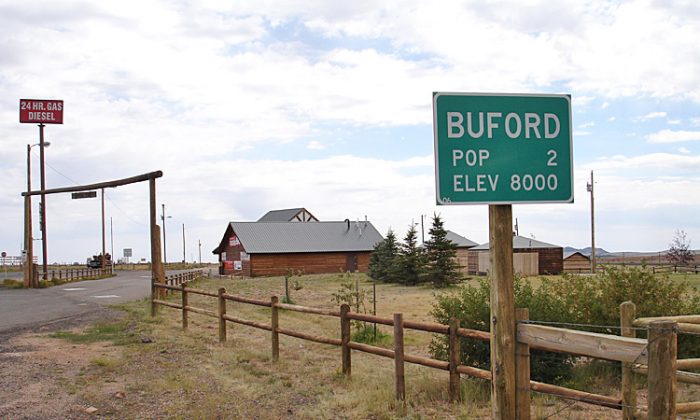 Buford, Wyoming street sign pictured in 2006. Buford was reportedly bought Thursday by a businessman from Vietnam for $900,000 in an auction. (Flikr user 'frankenstoen'/Creative Commons)
US

A Wyoming town that has a population of just one person was bought Thursday by a businessman from Vietnam for $900,000 in an auction, it was reported.

The auction of the small town of Buford, which has only a convenience store, a gas station, and a single home, gathered international attention.

Buford’s lone resident, Don Sammons, owned the town and decided to auction it. “My family is gone. Our purpose for moving here has kind of been completed, and now I want to find out what other adventures I have in store,” Sammons told Reuters.

Williams & Williams, the firm that held the auction, said the buyer will also get “10+/- acres of land, five buildings, United States Post Office Boxes, inventory, furnishing, tools, plow and three vehicles” as well as a wireless tower, and a parking area.

The identity of the buyer was not disclosed and once Sammons moves, it is unclear if the town will have any residents living there, Reuters said.