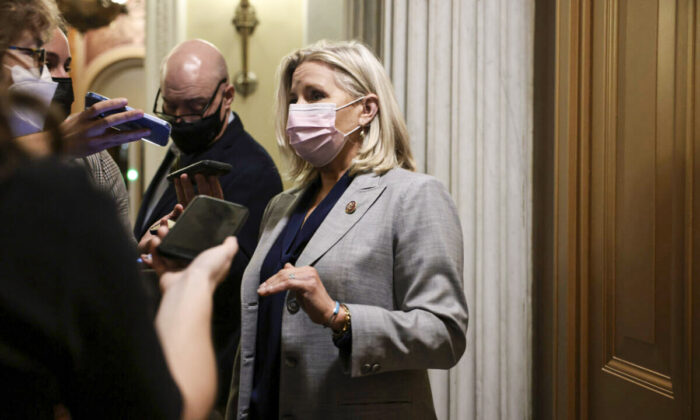 Rep. Liz Cheney (R-WY) speaks with reporters outside of the House Chambers of the U.S. Capitol on October 12, 2021 in Washington, DC. (Anna Moneymaker/Getty Images)
Republicans

The Wyoming Republican Party voted on Saturday to stop recognizing Rep. Liz Cheney (R-Wyo.) as one of its members.

The vote is the second rebuke of Cheney over her vocal enmity toward former President Donald Trump. In February, the Wyoming GOP voted overwhelmingly to censure Cheney for her vote to impeach Trump. The U.S. Senate found Trump not guilty of the charge against him.

“Previously mentioned in the resolution of censure, Representative Liz Cheney ‘cast her vote in favor of impeachment without any quantifiable evidence of High Crimes or Misdemeanors,” the resolution stated, according to the Casper Star-Tribune. “As to date, no quantifiable and or undisputed evidence has been offered Representative Liz Cheney to defend her questionable decision.”

The state party’s central committee voted 31-29 during a meeting in Buffalo on Saturday to unrecognize Cheney. Similar votes have already passed in roughly one in three of Wyoming’s 23 counties.

Cheney prefaced her impeachment vote with a speech harshly condemning Trump for the riot in Washington on Jan. 6.

Cheney spokesman Jeremy Adler told The Associated Press in a text on Monday that it’s “laughable” for anybody to suggest Cheney isn’t a “conservative Republican.”

“She is bound by her oath to the Constitution,” Adler said. “Sadly a portion of the Wyoming GOP leadership has abandoned that fundamental principle and instead allowed themselves to be held hostage to the lies of a dangerous and irrational man.”

Cheney was among 10 Republicans who voted to impeach Trump. Like the others on the list, Trump’s camp has targeted Cheney for a primary challenge. The former president endorsed Cheyenne attorney Harriet Hageman, one of the four Republicans challenging Cheney.

“Liz Cheney stopped recognizing what Wyomingites care about a long time ago. When she launched her war against President Trump, she completely broke with where we are as a state,” Hageman told the Casper Star-Tribune.

In July, House Speaker Nancy Pelosi (D-Calif.) appointed Cheney to the House Select Committee on the January 6 Attack. Two months later, Pelosi promoted Cheney to the vice-chair of the committee.