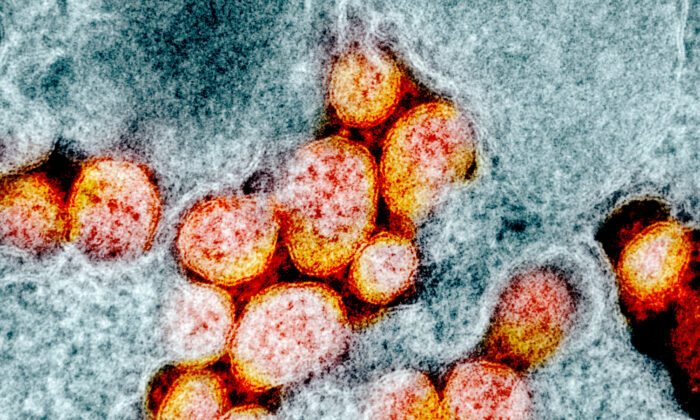 Transmission electron micrograph of SARS-CoV-2 virus particles, which The Epoch Times refers to as the CCP virus, isolated from a patient. (NIAID)
AMERICA

Wyoming Becomes Last State With a Death From CCP Virus

Wyoming became the last state to confirm a death from the CCP virus this week.

All 50 states now have at least one death.

“This one was close to home and sadly serves as a grim reminder of the importance of following public health orders and guidance so we can reduce the number of serious illnesses and deaths in our state,” the governor said, expressing condolences from him and his wife to the man’s family and friends.

“This is a sad development we hoped we wouldn’t see in Wyoming, and we want this person’s family to know they have our sympathy,” Dr. Alexia Harrist, state health officer and state epidemiologist with the Wyoming Department of Health, said in a statement. “The advice we’ve been offering and actions we’ve taken ultimately come down to preventing as many serious illnesses and deaths connected to this disease as we can.”

The Johnson County man’s age wasn’t given, and his identity hasn’t been disclosed. Johnson County Healthcare Center, where he was treated, described him as an older male. The patient was hospitalized for one day prior to his death.

Johnson County Emergency Management reported the first positive case in the county on March 26, describing the patient as an adult male who was told to isolate at home along with his immediate companions. Another case was confirmed later in the day. One was described as a Buffalo resident who was tested in Sheridan.

As of April 13, the county had 11 confirmed cases, two probable cases, and 10 recoveries, according to the department. Its medical liaison, Dr. Dozier Tabb, said in a message to residents that they should “continue conscientious social distancing, handwashing, and isolating if one feels ill.”

“Research suggests that the COVID-19 peak in our community will not occur until mid-May,” the message read.

Wyoming as a whole has 275 confirmed cases and 98 probable cases along with 138 recoveries.

Anyone can get sick and has a chance of getting seriously ill with COVID-19, Harrist said.

“While we’ve learned most people who are infected are able to recover at home without medical care, we also know people who are aged 65 and older and people who have medical conditions such as heart disease, lung disease, diabetes, and weak immune systems are more likely to experience complications and become severely ill,” she said in the statement.

Wyoming, which has the lowest population in the United States, hasn’t issued a stay-at-home order, but Gordon has issued a number of other orders.

Gordon earlier this month said anyone entering the state for a purpose other than work would have to self-quarantine for two weeks. Earlier this year, he mandated the closure of some businesses, ordered no public gatherings of 10 or more people, and required the closing of all schools in the state.