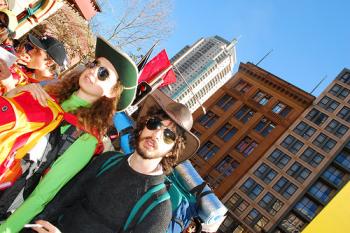 Suheil, leader of the only Palestinian music group that joined WYD in Sydney festivities. (Sonya Bryskine/The Epoch Times)
US

Prayers of Hope at WYD

For the majority of the 125,000 international pilgrims in Sydney, the 10th World Youth Day (WYD) is a chance to meet new friends. But for a handful, it is also a time of prayer for change back in their own homelands.

Such is the case for a group of 10 Catholic Palestinians from Jerusalem. They travelled to Sydney with a message of hope that peace will one day be a reality in the Holy Land.

Representing a music and dance group symbolically named Raja, which in Arabic means hope, the group’s leader Suheil says they are the only group in Jerusalem that plays Christian music.

“That is what we try to proclaim – peace, joy, hope. There is hope on the other side. Not to lose hope because of where we are living,” said Suheil, as he prepared to perform at a Wednesday night WYD concert at Darling Harbour.

This year is the first time that the Holy Land is formally represented at WYD, being slotted into the official programme of events. Raja was also the only group to perform in Arabic.

“Music can unite people. It’s a universal language,” said Sheil, but admits that things are a little difficult back home because of the volatile political situation.

“We live a life of openness and acceptance. My wife is Jewish, but of course we live in the Arab side. Most of our friends are Muslim,” he explains.

Coming from the other side of the world is Hya Tingh from Mainland China, Jilin Province. She travelled to Sydney alone and says that there are very few Catholics back home.

“We don’t have prayers in Chinese…China is not a religious country. They don’t know Jesus; they don’t have this community,” she explains.

The largest remaining communist country and also the world’s most populous nation is officially an atheist state.
The estimated 12 million Catholics are split between the state-approved churches and the underground ones.

The latter carry uncensored bibles and accept the Pope as the leader of the Catholic Church, while the state-controlled parishes follow the “Party line” in order to get funding and avoid persecution. Human Rights groups estimate that thousands have been subjected to torture and imprisonment.

Beijing cut formal ties with the Vatican in 1951 and insists on appointing its own bishops, saying Vatican’s involvement interferes with its internal affairs.

However, Ms Tingh says things are changing as people are beginning to search for a spiritual way out.
“Now they ask you what is Jesus and ask you take them to the church. They just don’t know; they can’t find. People are looking.

Kay Rubacek, spokesperson for the Falun Gong spiritual movement, agrees. She believes WYD is a perfect opportunity to not just celebrate freedom of belief, but also remember those who are “less fortunate”.

“With widespread persecution and torture of religious believers continuing across China, the Chinese people, more than ever, need the prayers of people of all faiths,” said Mrs Rubacek.

The nine-year persecution campaign was remembered, as Falun Gong practitioners joined the WYD celebrations. The 60-piece marching band welcomed over 120,000 pilgrims as they marched through Sydney on Saturday. The youth were en-route to the massive sleep out at the Randwick Race Course, where the final Papal Mass took place on Sunday.

“It is a time celebrating faith and also a time to remember those who are less fortunate and denied the right to freedom of belief,” says Mrs Rubacek, who herself plays a cornet in the band.

Falun Gong, a spiritual discipline that combines meditation and strict moral principles rooted in the Buddhist traditions, has been under harsh persecution in China since July 20, 1999.

To date over 3000 deaths have been documented, as well as over 63,000 accounts of torture. The UN Special Rapporteur on torture Manfred Nowak, estimated that at least 60 per cent of all cases of torture in China involved Falun Gong.