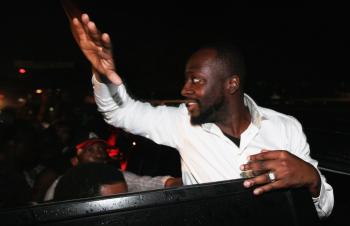 Wyclef Jean waves to supporters as he leaves a hotel while waiting to hear if he will be considered eligible to run for the Nov. 28 presidential election on August 20, 2010 in Port-au-Prince, Haiti. (Joe Raedle/Getty Images)
US

Helena Zhu
View profile
Follow
biggersmaller
Print
Haitian hip-hop singer Wyclef Jean said Sunday that he is not giving up on his presidential bid and will ask the courts to overturn the Haitian election commission’s decision to disqualify him from running.

Jean, 40, was among 34 candidates wanting a spot in the Nov. 28 election to elect a successor to President René Préval, who is ineligible to run after two terms in office. Haiti’s provisional electoral council Friday night, approved 19 candidates and rejected 15, including Jean.

The council ruled that Jean failed to meet the requirement that candidates need to reside in Haiti for five consecutive years prior to running.

Jean told The Associated Press that he has a document "which shows everything is correct" and that he and his aides "feel that what is going on here has everything to do with Haitian politics."

"They are trying to keep us out of the race," he said, referring to Haiti's political establishment.

Jean’s lawyer will file an appeal with the national electoral dispute office.

The elections in November will be the first since the country was struck by an earthquake in January.