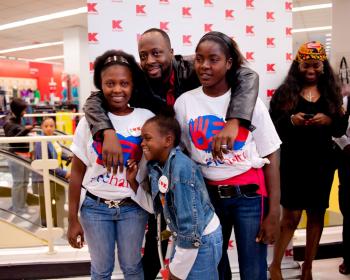 Wyclef poses with amputees Margarette, on the right, Chantal on the left and little Farah in the front as they pose for a few pictures before setting off on a shopping spree at Penn Station KMart on Tuesday. (Aloysio Santos/The Epoch Times)
US

By Kristina Skorbach
Print
NEW YORK – Margarette, Farah, and Chantal quietly spoke Haitian Creole with their relatives and Yéle volunteers as they shyly entered the Penn Station KMart on Tuesday. The three young ladies were offered a complementary shopping spree before going into surgery for prosthetic limb implants, a relief plan that was initiated by Global Medical Relief Foundation.

Wyclef Jean is the co-founder of Yéle Haiti, a foundation aimed at improving education, food, and relief to people in Haiti that was established in 2005. Wyclef partnered with KMart and Delta Airlines, a sponsor of Yéle Haiti, helped the three young girls come to the United States and receive free prosthetic limb implants. Wyclef greeted the amputees at the KMart by hugging little Farah and exchanging kisses on the cheek with the two older girls.

Chantal Mori lost her arm and Margarette Pierre lost her arm above the elbow, both girls, who are 17 years of age, were affected by the devastating Haiti Earthquake. They were accompanied by Farah Maurice, an 8-year-old girl who lost her left leg above the knee in the tragedy.

According to Red Cross, over 3 million people were affected by the earthquake, and the official press release wrote that between 4,000 and 6,000 Haitians will have their limbs amputated because of risk of fatal infection.

“It’s important to bring the kids here and help them here,” said Wyclef, adding that currently most of the efforts are focused on sending help into Haiti. After taking a few pictures with the girls and their remaining relatives, Wyclef told the media, “They would love to take pictures, but they told me they just want to shop.”

Wyclef, a native Haitian, said that celebrities like Angelina Jolie influence his work in helping the ones in need, “everything she do is from the bottom of her heart,” said Wyclef. He joked that Angie should adopt a child from Haiti.

Haitian girls strolled around the store wearing Yéle T-shirts and had other Yéle volunteers help them pin on ‘I (heart) K’ badges. They didn’t take much notice of the flashing cameras following them around the store.

KMart staff helped the girls pick out clothes according to their preference, as Wyclef said that Haitians have a lot of French influence in their fashion style. “Nine out of ten times they look chic,” said Wyclef and referred to his black leather jacket and the ‘popped up’ collar of his dress shirt.

“I’m very happy [to be in America]” Margarette smiled as she told Epoch Times in French. Margarette said she knew who Wyclef was because she saw him on TV in her native Haiti and was overwhelmed with joy when offered this opportunity. She preferred rocker-style clothing and fancied a black shirt with a glittery ‘Love Your Life’ graphic.

After the girls finish up their shopping excursion they will travel to Philadelphia later in the week where they will receive free treatment at the Shriner's Hospital for Children.