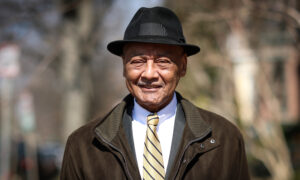 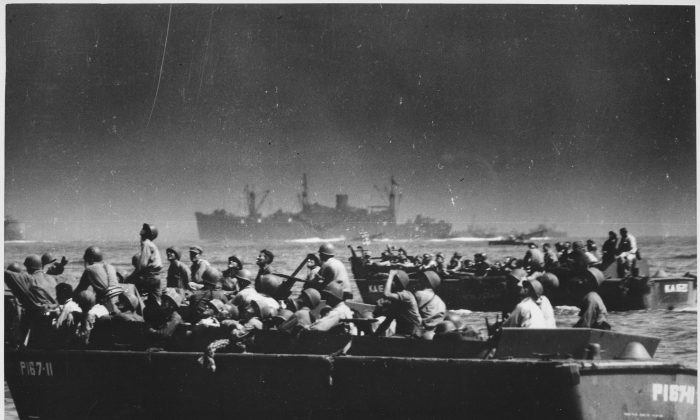 Landing barges carry U.S. troops to Leyte Island in October 1944, during the war in the Pacific of World War II. (U.S. Coast Guard)
US Features

For Memorial Day, author and veteran shares hope the world will remember the war in the Pacific
By Joshua Philipp
biggersmaller
Print

When World War II began for the United States on Dec. 7, 1941, D. Ralph Young was hitchhiking with a friend on his way to see a movie in Stanford, Kentucky. The two caught a ride, and a broadcast came over the car’s radio, announcing that the Japanese had launched a surprise bombing of Pearl Harbor.

Young was just 16 at the time, but the following year, his mother signed her permission for him to enlist in the U.S. Navy. When he turned 18 in 1943, he was sent to war.

For Young and many others, however, World War II was a very different experience from what is often seen in movies. His war wasn’t on the beaches of Normandy, nor in the icy forests of Germany; instead, he and others faced jungles and rain, kamikaze pilots, and banzai charges from Japanese forces across the islands of the Pacific.

Now 93 years old and living in Dayton, Ohio, Young is working to ensure that he and others who fought in the Pacific theater of World War II are not forgotten. His recent book, “Forgotten Warriors,” tells his story.

He shared his hope that on the upcoming Memorial Day holiday, Americans will remember the Pacific and the men who fought there.

“I have passion for it, because I feel those of us who served in the Pacific are being overlooked,” Young said in a phone interview.

War in the Pacific

He added that while the death rate of American prisoners of war (POWs) in Europe was just over 1 percent, the death rate for POWs under the Japanese was 40 percent.

In the 1943 Battle of Tarawa, Young said, two out of three Marines were killed before they reached the beach. The coral reef surrounding the island was too shallow for the armored landing craft, and the men had to wade ashore under fire from Japanese machine guns.

“The Marines had to be offloaded 1,000 yards or more, on the beach, into water over their heads. And with full battle gear, they had to survive gunfire that was awful, from the Japanese,” Young said.

Although Young came into the war shortly after the Battle of Tarawa, one of his nephews, from an older brother, fought during the battle. His nephew was armed with a Browning automatic rifle and was forced to wade across the coral reef to the man carrying his ammunition.

He went into overhead water, and, with the weight of his rifle and gear, was forced to sink and jump off the ground to briefly emerge from the water for breaths of air. “He reached the point where he said, ‘Lord, I can’t make it any longer,’ and lo and behold, on his next bounce, his feet were on the ground and his mouth was above water, so he could breathe.”

The Marines, Young said, were “the finest and greatest fighting force in the world … and were committed to winning at all costs.”

“They were the proudest group of people you’d ever face, because they were so highly trained and so motivated from good leadership,” he said. “That never disappears from a Marine.”

When Young was deployed, his job on the USS J. Franklin Bell was to man the amphibious assault ships that brought the Marines to the beach, and to supply the troops already there.

He was also sent to shore on beach parties to ensure the Marines were getting the supplies they needed, and that they weren’t getting bogged down.

He said, “I never saw anyone afraid or breaking down and not able to go forward.”
Many scenes from the war were horrible. Young recalls when he and the others first witnessed a Japanese kamikaze attack at the Battle of Leyte: a massive air battle was fought overhead, ships fired and were fired upon, and a Japanese pilot intentionally crashed his own plane into an Australian warship.

Young remembers feeling regret for the sailors on the ship, who were relatively powerless against the method of attack. He said that in that instance, and in the kamikaze attacks that followed, “we tried to shoot them down, but it’s tough to shoot a plane down that’s determined to crash land on your ship.”

He said that when battles begin and the enemy ships and planes first appear on the horizon, “it’s kind of hard to describe how you feel.”

“Your adrenaline starts to flow very heavily. You’re anxious and you’re excited, and you know that you’re in a battle for life or death,” he said.

“It’s a time that you think about things that you love.”

Young was the youngest of 11 children. When he was 10 years old, his mother suffered a stroke, and his father put him in charge of cooking, cleaning, and doing the laundry, under his mother’s guidance. Because of this, he and his mother were very close. She passed away when Young was 18, but before she died, she prayed for him constantly.

There were several times when Young felt his mother’s prayers were answered.

On one occasion, an ammunition ship was destroyed by the Japanese, killing many men and women as the force of the blast sunk all ships around it. The ship Young was stationed on had moved away from the ammunition ship just an hour before it exploded.

On another occasion, Young and a group of men were sent to an island to move supplies, and were ambushed by a Japanese soldier who was hiding in a bamboo thicket. The man went to fire on

Despite all the horrors he faced in the war, Young said he lived “a fantastic life,” and that the battles left him with love for his country and admiration for the bravery of the U.S. Marines.

When he arrived in Saipan, he was received with gratitude by the locals, who presented him with a medal to thank him for his service.

“I never gave any thought to the fact that not only did we fight for the USA, but we freed a lot of natives that had been under Japanese rule for centuries. And that’s why they awarded me a [medal for] valor for the Pacific, from the group of natives who inhabit the Mariana islands,” he said. “Everywhere I went, people just wanted to shake my hand or give me a hug. It was totally unexpected.

I had no idea they would act that way, and it was a great feeling.”

Young noted that, like many other veterans, he rarely spoke about his story. He decided to change this, only recently.

Through sharing his story, Young said, he hopes others will “develop a love for the country and its freedoms” and that the world will remember those who fought in the Pacific.