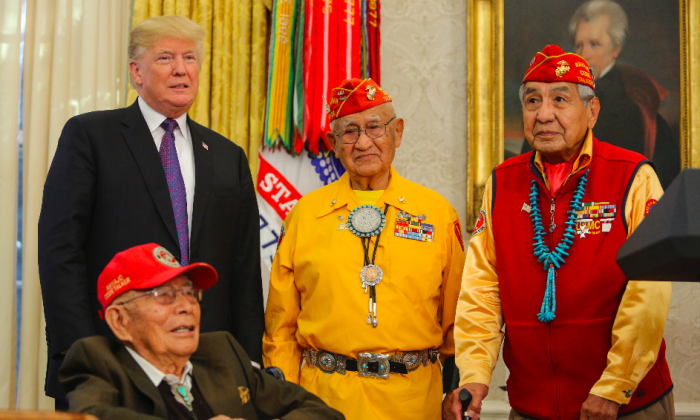 WASHINGTON—Three of the 13 surviving Navajo Code Talkers of World War II met with President Donald Trump at the White House on Nov. 27.

Speaking at the event, Peter MacDonald, 90, president of the surviving code talkers, said he enlisted in the Marine Corps to become a code talker in 1944, when he was 15.

“In the early part of World War II, the enemy was breaking every military code that was being used in the Pacific,” MacDonald said. “This created a huge problem for strategizing against the enemy.”

In early 1942, the suggestion was made to use the Navajo language as a code. MacDonald said the Marine Corps recruited 29 young Navajos. After basic training, they were taken to Camp Elliott near San Diego.

The Navajo Marines created 260 code words, committed to memory only.

“On Aug. 7, 1942—75 years ago—the 1st Marine Division hit the beaches of Guadalcanal with 15 Navajo Code Talkers,” MacDonald said. “This was the first battle where the Navajo code was to be tested in actual battle to test to see how our memory would be under heavy enemy fire.”

MacDonald said that three weeks after the landing, Gen. Alexander Vandegrift, commander of the 1st Marine Division, sent word back to the United States saying the code was working and to please send more Navajos.

“In every battle—from the frontline, beach command post, command ship, all other ships—code talkers were used,” MacDonald said. The successful taking of Iwo Jima was attributed to the Navajo Code Talkers.

Accompanying MacDonald at the White House were Navajos Fleming Begaye and Thomas Begay.

Begaye, 97, survived the Battle of Tarawa, MacDonald recounted. “His landing craft was blown up, and he literally had to swim to the beach to survive. He also landed on Tinian, where he got shot up real badly, survived one year in naval hospital.”

Begay was a code talker on Iwo Jima with the 5th Marine Division, said MacDonald.

“Also, as if Marine Corps was not enough, he enlisted to be United States Army and served in the Korean War.  Survived that awful battle at Chosin,” he said.

“What we did truly represents who we are as Americans,” MacDonald said. “America, we know, is composed of diverse community. We have different languages, different skills, different talents, and different religion.

“That’s why we need this national Navajo Code Talker museum, so that our children, the future generation, can go through that museum and learn why America is so strong.”

Trump said he invited the code talkers to the White House to honor their contribution and promised to help bring the museum to fruition.

“You are special people. You are really incredible people,” he said. “And from the heart, from the absolute heart, we appreciate what you’ve done, how you’ve done it, the bravery that you displayed, and the love that you have for your country.”

“What these men did, the advantage they gave our Marines when they invaded Iwo Jima was really—and I think it was pointed out—was one of the very few factors that allowed us to be successful on that island,” Kelly said.

“What they did, very small number of men, sir, made the difference. We lost 6,000 Marines and 25,000 wounded on that island in 28 days of battle. It would have been a lot worse had we not had the Navajo Code Talkers. And I thank you.”