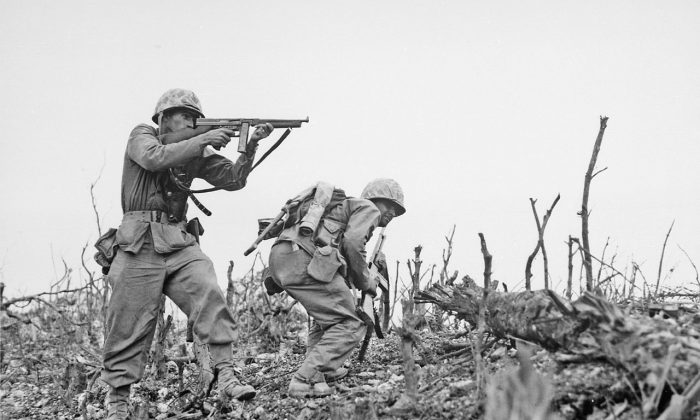 A file photo of American soldiers during WWII. (Public Domain)
US

“I tripped over a root, felt something hit my rifle, saw something plow up the ground under me and, as I was told later, had a hand grenade explode at my feet. Lucky tumble.

“This is the second time that I’ve been missed by mere inches. Tonight I’ll be on my knees all night thanking God.”

From Saipan, in the Northern Mariana Islands in the Pacific, Dec. 6, 1944:

“You’ve probably heard or read by now that we’ve been banging away at Tokyo… We had hardly started before the Japs decided to retaliate.

“It’s quite a feeling to be awakened in the middle of the night to the roar of planes, bursting flak and exploding tracer bullets . A fireworks exposition on July 4th at White City would have to go some to compare with this.”

“The outfit got as far as Dessau and we were called back off the line that was about two days before the war ended. At that point we weren’t very far from the Russians .

“There is no need to say that I am glad that the whole mess is over… It has been a pretty long grind from Normandy in June last year to Dessau in May there were many long and hard miles and many times that we wondered if we would be able to go another mile.”

“Women! What are they… One thing I have found is a guy can do without them if he has to (but it is darn tough).”

These are excerpts from some 1,400 letters home written by Worcester soldiers, sailors, airmen and Marines on active duty during the Second World War.

Mailed to a local newsletter, the Vernon Hill Spiel, that shared news from servicemen from the Worcester neighborhood who were in action around the globe, the letters were preserved in shoeboxes in a closet for decades after the war.

This week, copies of 50 of the letters will be included in a time capsule that will be buried at the new World War II Memorial to be dedicated on Worcester Common on June 4.

The World War II letters are a time capsule in themselves. They describe “harrowing accounts of battle, heartfelt yearnings for home, the fears and loneliness of soldiers, and the inevitable serendipitous meetings halfway around the world of someone from Worcester or even Vernon Hill,” the Telegram & Gazette reported in 2002.

The letters were sent during the war to the editor of the Spiel, a Worcester firefighter named Donald F. Gribbons, who with the aid of volunteers working out of booths at Leavitt’s Spa published 43 editions of the newsletter between 1943 and 1945.

An effort was made 14 years ago to return the letters to as many as could be found of the veterans who wrote them or their family members. Hundreds of the letters were returned.

The unclaimed remainder since has been held for safekeeping by Francis R. Carroll, of Worcester, a past commander of Vernon Hill American Legion Post 435, who maintains a private museum and archive at the Main Street offices of his company, Carroll Enterprises Inc.

Carroll said last week that copies of a selection of the letters would be placed in the capsule at the memorial on Worcester Common, and that all the originals are to be placed in the Worcester Historical Museum, where they can be preserved for future generations.

“I owe it all to Don Gribbons, God rest his soul,” Carroll said. “This was history saved in a shoebox by a loyal American who started a little publication called the Vernon Hill Spiel.”

The years fall away when reading the letters, said Carroll, who recalls many of the names from when he was growing up on Vernon Hill. Himself a veteran of naval service on a destroyer in the North Sea during the Korean War era, Carroll said when he joined the Vernon Hill American Legion Post, most of the members were World War II vets.

“I remember one guy (named) Duggan—he had two destroyers sunk out from under him during World War II,” he said. “Another, Bobby Brousseau, was a member of Merrill’s Marauders, the China-Burma guys who were really tough—those guys were in the jungle all the time.”

He recalled when some of the living World War II veterans got their own letters back. “You talk (about) grown men crying,” he said. “One fellow recalled how he was in a German bunker, and the rain coming down, freezing, and writing his letter by match … he swore up and down he wanted to get the hell out of there. That’s exactly how it was.”

During the war nearly 500 Vernon Hill residents wrote to the Spiel from around the globe. To get a subscription, a soldier or sailor had to promise to write one letter a month to the newsletter. Letters poured in from all over, from Europe and North Africa, from across the Pacific, from locations that couldn’t be named because of military censorship.

Writing from somewhere in the Pacific, where he was serving with the Second Marine Division, was Navy Pharmacist’s Mate Leonard “Hooker” O’Rourke.

“We are sporting a full moon these nites,” O’Rourke writes in a letter from April 1945. “Makes me dream of the park and the days when I walked the lanes with the girl friend. When a guy looks back it does not seem so long ago, but lots of water has gone over the dam since then.”

Said Carroll: “One thing that does come out of these letters is the strong ties all these young men had to the city of Worcester and their neighborhoods. Worcester meant a lot to them.”

Captured in the letters are stories of friendship, courage and a longing for home, Carroll said. “What comes across is the ‘buddy-buddy’ business: ‘I’m in Guam, I participated in the invasion and I ran into three guys from Worcester—Wow!’ Some would say, ‘So-and-so was killed, so sorry to hear about that.’ That would be sadness.”

Thirty-eight from Vernon Hill were among the 678 from Worcester who died in the war.

A century from now, great-great-great-great-grandchildren of men and women from Vernon Hill who served in the Second World War may be among the citizens who open the time capsule buried on Worcester Common.

The letters they will read combine an often light and jaunty style of writing for the “gang” back home with hard-bitten descriptions of battle—of killing or being killed, of searching dead enemy soldiers for souvenirs—that reflect wartime realities jarring to latter-day sensibilities.

For example, they will read an apocalyptic description of the city of Darmstadt, Germany, at the close of the war by Sgt. T.F. “Tom” Powers of Worcester, who served in a tank battalion in the Third Armored Division.

“If you want to see a city that is banged up it is this place,” Powers writes. “They had one 40 min. raid and there are only a hand full of buildings left and there were 50,000 killed. That is the kind of bombing we like to see.”

And they will read copies of letters from J.J. “Joe” McKeon of Worcester, an infantryman whose division fought 112 days without relief in the Battle of Luzon in the Philippines in 1945, a record for the Pacific Theater. His regiment had 300 killed and about 1,000 wounded in the battle.

“After making that record, I don’t believe there are any of the fellows who would care to extend it,” he writes. “Believe me it was tough going and I have the good Lord to thank for seeing me through it all.”

His description of a firefight while on patrol in the rice paddies and bamboo jungle carries a foreshadowing of Asian wars to come.

“I kept pretty alert, believe me,” McKeon writes. “I’m no hero, and this idea of creeping along, not able to see anyone, and expecting a slug to hit you at any second, well if I say I felt sick in the stomach I’d be making an understatement.”

McKeon continues: “The way I feel about it. Any man who is in a rifle company is OK. He’s done the hardest work of all and deserves the best we can give him. It is a tough mental and physical grind on them every minute they are in the line…

“These are the men who suffer the heavy casualties, who win the ground taken and who feel the war the most. I feel mighty humble in their presence.”