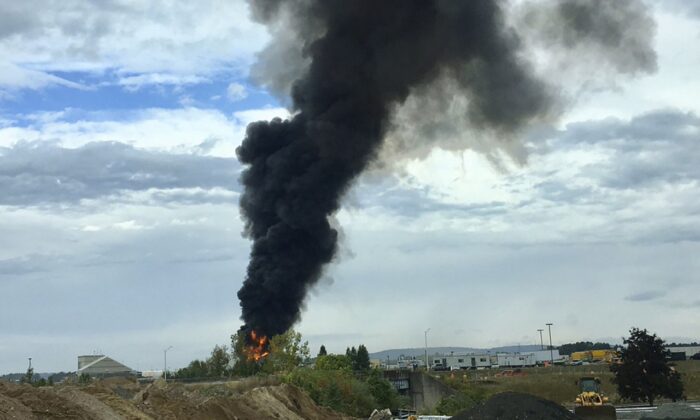 Smoke fills the sky after a World War II-era bomber plane crashed outside Bradley International Airport north of Hartford, Conn. A spokesman for Gov. Ned Lamont confirmed the crash of the B-17 plane on Oct. 2, 2019. (Antonio Arreguin via AP)
US News

A vintage World War II-era plane crashed at Bradley International Airport in Connecticut on Oct. 2, causing a major fire, according to the airport.

The airport wrote on Twitter that it is closed.

“We can confirm that there was an accident involving a Collings Foundation World War II aircraft [Wednesday] morning at Bradley Airport,” it said on Twitter. “We have an active fire and rescue operation underway. The airport is closed. We will issue further updates as information becomes available.”

The Hartford Courant newspaper reported that the plane involved in the crash was a B-17.

We can confirm that there was an accident involving a Collings Foundation World War II aircraft this morning at Bradley Airport. We have an active fire and rescue operation underway. The airport is closed. We will issue further updates as information becomes available.

Multiple injuries were confirmed, reported the Courant, but it is not clear the extent of them. It’s unclear if there were any deaths.

The National Guard also said that it was a historic aircraft, WSFB reported.

A number of fire department officials were called to the scene. The smoke could be seen for miles, according to social media posts.

Five vintage World War II-era planes were on display at the airport as part of a Wings of Freedom Tour, the station reported.