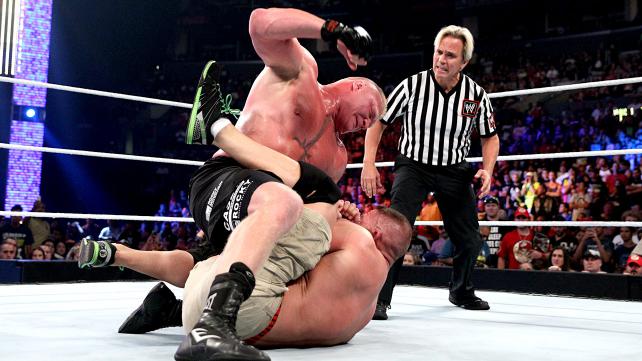 The 2014 WWE Summerslam is over, with multiple new titleholders–including Brock Lesnar.

AJ Lee lost to Paige in one of the other matches.

Check out full results and highlights below. Predictions are from WWE.com.

Highlights: Brock Lesnar dominated Cena in the fight, taking the WWE World Heavyweight title. “@BrockLesnar gave the most one sided match I’ve ever seen I can’t believe what I saw. I hope @JohnCena will be able to walk after that,” noted one Twitter user.

“Brock Lesnar beat the [expletive] out John Cena,” added another.

Reigns started to gain momentum, landing a Somoan Slam, leaving both men dazed. They both landed hits, but Reigns came out of the exchange seemingly ahead. He then landed a running dropkick. Orton came back by pushing Reigns into the crowd barricade, then threw him into one of the sets of steel ring steps outside the ring.

Back inside the ring,Reigns hit Orton with a punch then a Somoan Drop for a two-count. He soon landed a Superman Punch. Orton countered with a Powerslam for a two-count, then landed a DDT after Reigns got up. Orton went for an RKO and got it. A 2-count again. Orton tried to knockout Reigns with a running boot but Reigns caught Orton, pushed him down, and landed the match-winning Spear.

Orton may have lost the match but fans lauded his fighting ability, with “What a RKO” trending on Twitter as fans said that Orton was “amazing” and “absolutely incredible.” One said: “That honestly should of been the end of the match,” while another said “Kudos to Reigns.”

Highlights: Both women had locks and hits early in the fight, with Brie eventually on the defensive as Stephanie got her into several locks. Bella recovered and dropped McMahon with a Lou Thesz Press, and landed a series of side kicks on Stephenie. McMahon fought out of it and recovered, as Nikki and Triple H ran out to support their respective fighters. Bella was close to finishing the fight with a Yes Lock, but Triple H pulled the ref out of the ring.

Nikki hopped into the ring, but instead of helping Brie she laid out her own sister. Stephanie finished Brie off with a Pedigree for the win. Few believed that Brie could win this match. In what one fan said was a “predictable ending,” Brie was double-crossed by Nikki. “An otherwise good match ruined by yet another below standard ending,” the fan said on WWE’s website. “Garbage match!”

Highlights: Jericho began the match in a fury, beating down on Bray and landing a body press from the top rope. Wyatt rolled out of Jericho’s pin attempt, and started fighting back, gaining momentum. He landed a series of moves, including a knee near the steel steps outside the ring. He soon landed a Lariat followed by a Running Senton.

Jericho came back with some moves of his own, including a Hurricanrana, and a front dropkick. Wyatt managed to get out of the ring thanks to his ring crawl, which momentarily froze Jericho. Wyatt then hit his signature Sister Abigail finisher–twice–and Jericho was done.