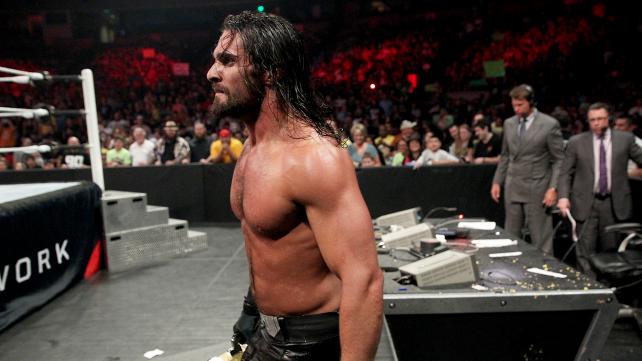 WWE Smackdown is on tonight at 8 p.m. and spoilers have come out regarding who won and lost, and what happened.

The episode kicks off with Dean Ambrose having an in-ring promotion, but Seth Rollings interrupts from the stage.

“Ambrose announces a Lumberjack Match for SummerSlam. Rollins picks Ambrose’s opponent for tonight and it’s Randy Orton,” according to PWMania and confirmed by other blogs.

Rollins then goes on to defeat Dolph Ziggler.

The match between Ambrose and Orton ends in a no contest when Rollins interferes and a brawl breaks out. The match lasted almost 30 minutes.

The episode also includes a lot of recap videos, as well as a promotion with Chris Jericho talking about Bray Wyatt and SummerSlam.

Speaking of Orton, he recently revealed that he has a new movie role/project in the works.

“Something is in the works, but too early to talk about,” he told an inquiring fan.

And Rollins recently told Digital Spy that he’s prepared to deal with Ambrose.

“I’m a smart guy. I like to think I know a thing or two, especially about those two and I kind of knew how each of them would respond. Now, did I think Ambrose was going to take it to the level he’s been taking it? Trying to dedicate an entire year of his existence to me not winning the Heavyweight Championship? No,” he said.

“But I am also prepared to deal with Dean Ambrose in that way, so it’s okay – It’ll be alright, it’ll be just fine.”

“I’m focused on getting Dean Ambrose out of my hair at SummerSlam,” he added. “Dean Ambrose is a kooky guy. He’s got a strange way of thinking about things, which can be interesting one way or another.”