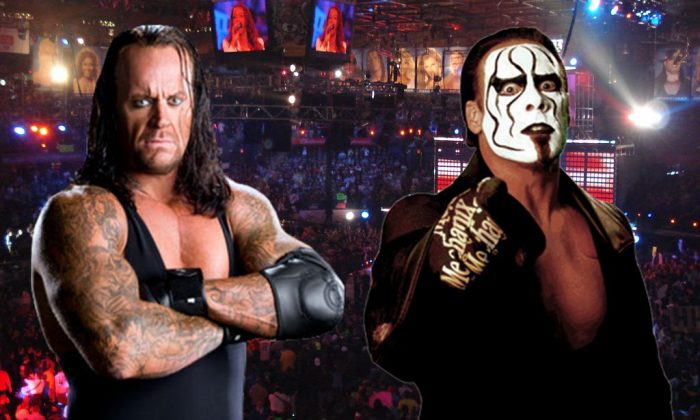 Undertaker (on the right) and Sting (on the left) (source bing.com)
News

Undertaker vs Sting at WrestleMania 32?

If Undertaker does decide to return, a match with Brock Lesnar would make more sense creatively. The Undertaker should face Lesnar upon his return, try to avenge his loss, and then maybe if Undertaker wins go after Sting. This is where the WWE messed up creatively; if there was ever a wrestler fans would have been ok with ending the streak, it probably would have been Sting. Both have had careers that have spanned a little over two decades, and have won multiple world titles in their respective companies. The two men can arguably be two of the greatest wrestlers ever, and will without a doubt be in the Hall of Fame one day. Making Undertaker lose at WrestleMania hurt the chances of Undertaker vs Sting from ever happening. The chances of this match happening are very slim because both men are at that point in their career where it’s time to think about calling it quits.

There is always the possibility though that WWE can make Undertaker vs Sting at another venue (like Summer Slam or Survivor Series), but (and I think fans would agree) it just wouldn’t have the same impact that WrestleMania would.If The Undertaker vs Sting match happened at WrestleMania 31 would it be cool, yes, but if circumstances were different it could be much better.  With both of their careers ending, WWE fans hope to see this match soon, but it’s probably not going to happen at WrestleMania 31.

WWE could promote the match all year sort of like they did with The Rock and Cena. The idea of have The Undertaker vs Sting at WrestleMania 32 is not going to be a popular one, but it’s probably a better a better idea creatively. Having the Undertaker defeat Lesnar then go on to face Sting does makes sense, it may not sit well with some wrestling fans, but it makes sense. There is no denying that this match is one fans want to see whether they get it WrestleMania 31 or 32 probably does not matter to a lot of fans; all that matters is that they get too see it.

(this paper is just my opinion)