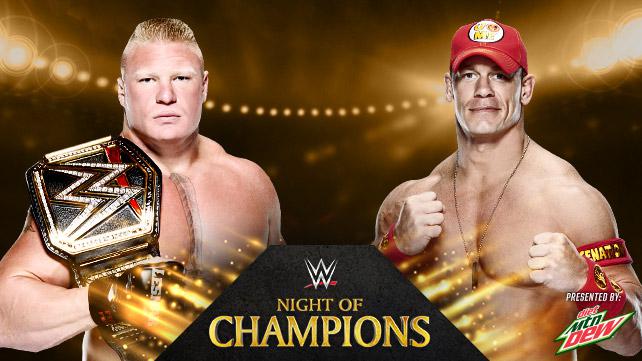 The WWE Night of Champions is coming up this Sunday and some new rumors and predictions have come out about the matches.

The headline match is a rematch between Brock Lesnar and John Cena with the WWE World Heavyweight title up for grabs, but pretty much everyone expects Lesnar to win.

However, one of the latest reports indicate that fans may be shocked because Cena could actually win the rematch.

“It’s still being said that a winner in the Brock Lesnar vs. John Cena match at Night of Champions is not finalized and it could very well be a last minute decision. Cena winning the title back is still on the table,” reported Cageside Seats.

“That said, there is still, apparently, a plan in place for Lesnar to defend the WWE world heavyweight championship at WrestleMania 31, likely losing it to Roman Reigns in a passing of the torch moment. That would be even if Cena wins Sunday night.”

Bleacher Report says in a “bold prediction” that Cena will lost, in fact tapping out to Lesnar.

“This time, Cena may not go down via pinfall to The Beast Incarnate. This time, Lesnar could make WWE’s No. 1 draw tap out. It would surely be a moment that no one expects, and if it happens, it could impact Cena on a very intense level,” wrote Tom Clark.

Another big match is Roman Reigns vs Seth Rollins. Clark says that Dean Ambrose will interfere with the match.

“When the time comes for Ambrose to return, he could very well get right back in Rollins’ face once again. The two former Shield teammates have a wealth of history and bad blood to draw from, and that could fuel the second round of their rivalry,” he said.

“But before that can happen, Ambrose needs to come back. And while Night of Champions may not be the full-time return that many fans want, it could be the initial appearance that eventually gets Ambrose back into the swing of things.”

Another big name at Night of Champions is Rusev, who will be battling Mark Henry.

Give Me Sport predicts that Rusev could actually be paired with Cena in the future, with the feud triggered at the pay-per-view.

“Rusev has been in an underwhelming feud with Mark Henry but if the rumours surrounding the imminent rivalry with Cena are true, then the WWE bookers can be forgiven for feeding Henry to Rusev as he steps up to take on the face of the company,” it said.

It said that the league has been building Rusev as the next challenger to Cena in the tier just below the World Heavyweight Championship.

Other announced matches are: Paige vs AJ Lee vs Nikki Bella for the Divas Championship; The Usos vs Goldust and Stardust for the Tag Team Championship; Dolph Ziggler vs The Miz for the Intercontinental Championship; Sheamus vs Cesaro for the United States Championship; and Randy Orton vs Chris Jericho.