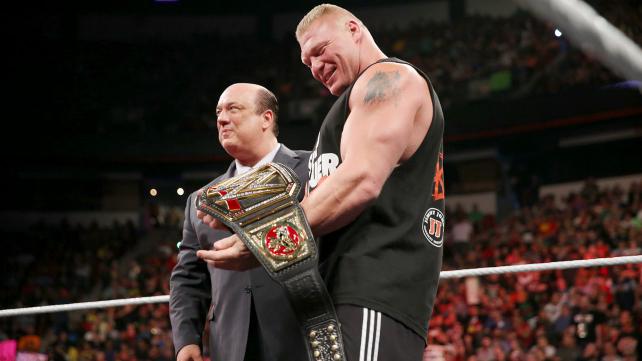 Brock Lesnar’s the biggest news in the WWE world with his recent destruction of John Cena at SummerSlam.

Lesnar won’t feature in that many matches the rest of the year because he’s a part-time wrestler, but predictions are being made as to the path Lesnar will go on leading up to WrestleMania 31.

It’s been confirmed that Lesnar will have a rematch with John Cena at Night of Champions, but few expect Cena to take the WWE World Heavyweight title back there, though he will undoubtedly fare better and earn some measure of redemption.

Ryan Dilbert of Bleacher Report is predicting an interesting path after that. He notes that the story after Night of Champions is that all of the league’s top wrestlers should be vying to get to face Lesnar.

Dilbert says that Lesnar will likely not fight at Hell in a Cell but Lesnar’s next title challenger will come from there, most likely Sheamus.

“He’s a brawler, a powerhouse and a former world champion. He offers a fresh matchup as well. At Survivor Series, The Celtic Warrior can give Lesnar a physical title bout. Their similar smashmouth styles would mesh well,” he said. Sheamus would end up losing then.

Another challenger would have to emerge, and Dilbert believes that will be Cesaro. Triple H will promise Cesaro inclusion in The Authority if he can face Lesnar, but Cesaro will reject Triple H after earning the title shot in a Ladder match at TLC: Tables, Ladders, and Chairs, saying he wants to face Lesnar for personal pride and the fans. Cesaro would then face but also lose to Lesnar at The Royal Rumble, which Roman Reigns will win.

The early matches in 2015 will give Reigns a chance to boost his strength by defeating other top wrestlers as the build-up to his match with Lesnar at WrestleMania will get better and better.

Wrestling Observer Newsletter reported that WWE officials are already making plans for Reigns and Lesnar to fight at WrestleMania.

Provided it happens, it will be the opportune time to for Lesnar to lose the title and Reigns to become the new champion.