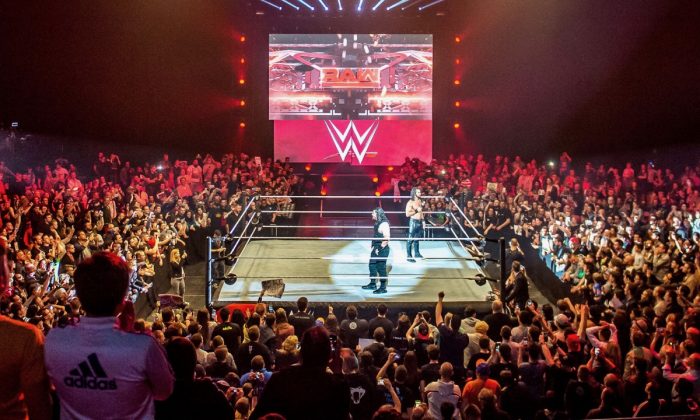 A WWE wrestling match at Zenith Arena On May 09, 2017. (Philippe Huguen/AFP/Getty Images)
Crime and Incidents

He released his confession via a video obtained by KATV. He also admitted to being present at the murders in an interview with KARN News Radio and in a video for a Gofundme campaign. He says that he was hired as part of a cocaine smuggling ring that included law enforcement and high-level politicians and that the two teens were murdered after they stumbled upon the area where a drug drop was taking place.

Haynes said he did not kill Kevin Ives and Don Henry but law enforcement officers that were part of his group did. He admitted to helping move the bodies onto the tracks of an oncoming train to help cover up the murder, according to KATV.

He said that on that night, Aug. 23, 1987, he was with three law enforcement personnel, two lawyers, a club owner, and two people he didn’t see that were waiting in a van, according to KATV. In the Gofundme plea, Haynes admits to getting involved because he was already involved in drug trafficking. Eventually, this led him to a “politician drug dealer” to seek his help as a hitman. He mentions an “Arkansas criminal politician” asked him to guard drug money the night the boys were killed, he says via the video posted on YouTube via Private Snoop. He also mentions that he could be killed for what he is revealing.

He supposedly names those involved in both the KATV video and in an interview with KARN News Radio, but both media have chosen to withhold the names or edit them out of portions of the recordings they have made public. The highest level politician in Arkansas at the time was Governor Bill Clinton. Unofficial theories abound on YouTube that the Clinton’s were involved.

Kevin Ives’s mother, Linda Ives, filed a lawsuit in 2016 alleging a cover-up since she could not obtain documents she requested about the case, according to Arkansas Matters. She said via video that she believes part of the reason the case didn’t move forward is because of the high profile people that could be implicated, according to her Private Snoop video.

Originally, the teens’ deaths were ruled suicide before an autopsy and a grand jury determined the boys were murdered, Arkansas Matters reported.