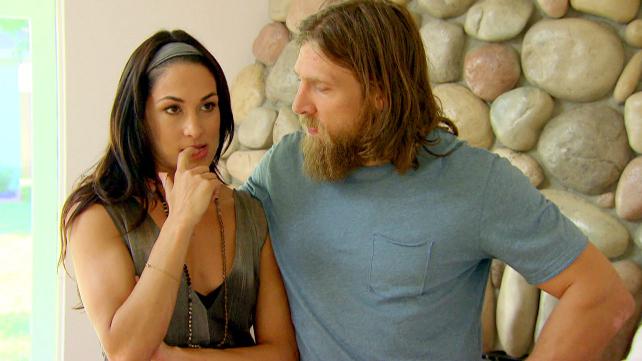 Daniel Bryan’s injury has been revealed as the reason that Brie Bella quit “Total Divas.”

“Bryan and I realized his injury was more complex and that he needed more time to heal,” Brie reveals in Sunday’s episode.

“But the best part about it is I quit on television as a storyline, just so I could stay home and help Bryan through this really hard time.”

E! News, which broadcasts the show, noted that Bryan was presented with a decision after undergoing emergency neck surgery, “give up his Championship title or his wife will be fired!”

But Brie decides to quit, but only after slapping boss Stephanie McMahon in the face. Apparently that feud was manufactured so that Brie could quit.

E! says that Brie will reveal her plans for life after leaving the league in the episode.

Bryan has faced a tough recovery period after his injury. Rumors indicated earlier this month that he elected to have the surgery when he did because he was told he’d be in the position Brock Lesnar is currently in, and felt he needed the surgery because his body couldn’t handle the fights.

Another rumor about Bryan is that he won’t need another surgery, and that he’ll be back by Royal Rumble, though that’s far from confirmed.

Fans and analysts aren’t sure whether Bryan can ever return to the form he was in before the injury.

“Daniel Bryan’s fairytale story ended shortly after Wrestlemania 30. Injuries robbed him of a lengthy run with the WWE Championship that he worked so hard to attain and threaten his very career. Can he ever reach those heights again? Will he return as a shell of himself, if at all?” wrote Cageside Seats.

“Or will be train harder than ever, heal his wounds, enhance his repertoire both in the ring and on the microphone to become an all-time great of the sport? Time will tell.”

It also noted that Roman Reigns is among the recent injuries.

“Daniel Bryan and Roman Reigns are out of action. This is a fact that cannot be altered. How will these men react to the challenge placed before them? And who will step in to fill the void? Who will use this obstacle to their advantage?”