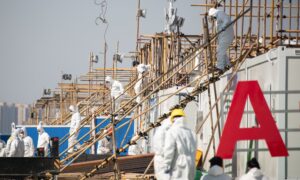 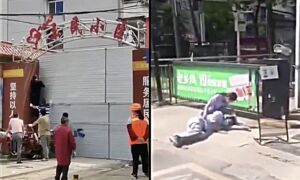 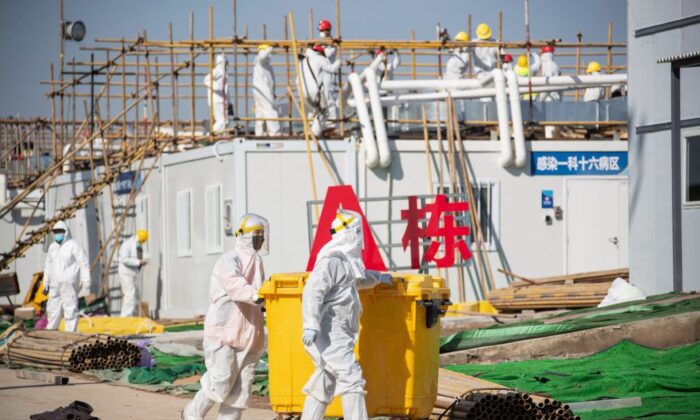 Workers go about their duties at a section of the Leishenshan Hospital in Wuhan, the capital of central China's Hubei province, on Feb. 18, 2020. (STR/AFP via Getty Images)
CCP Virus

Leishenshan Hospital located in Wuhan city, Hubei Province, is an emergency specialty field hospital built in response to the CCP virus pandemic. After it was “closed” on April 15, when the regime claimed its victory in containing the virus, its construction workers remained to defend their rights and fight for their unpaid compensation.

Yi Xiang (an alias) is a 26-year-old man from Shiyan city, Hubei Province. In February of this year, he applied for a mysterious construction job. Not until the day the work started did he realize that he was hired to build the field hospital.

According to Yi Xiang, not only were their wages siphoned off by subcontractors of various levels, but also the quarantine allowance promised by the contractor had never been paid. Instead, they have been treated with beating and suppression by security guards and police.

Temporary Relief for a Hubei Native

A Hubei native, Yi Xiang was having a hard time finding a job. No one from the province at the epicenter would be hired, even those who were actually nowhere near the epicenter during the pandemic. He was then living in Shenzhen, southeastern China.

In February, he answered a job ad on WeChat. It was construction work in Wuhan with room and board, and a 14-day quarantine after completion. Other than wages, no further information was given.

Patients Already Admitted to the Hospital

Many patients had already been admitted to the hospital. The workers were all worried but they had nowhere else to go.

“Where can you go? Lockdown policy had been enacted. There’s no transportation. No one else was there. We could only just bite the bullet and get it over with,” he said.

Every day, there were more than a dozen ambulances coming to the hospital, at least 30 or 40 people would arrive, most of them were elderly aged 60 or 70. Some of them were seriously ill. The construction workers tried to stay away from the patients, but often they had to just stand beside them.

One time, he saw two nurses with protective gear removing a dead patient with a piece of white cloth covering the face. He saw the white hair underneath the cloth.

He also witnessed protests near the hospital. The hospital was built in proximity to a residential area where hundreds of property owners who had just paid their first down payments to China Poly Group. Their new homes were to be used as quarantine sites without their consent. The protest ended with several homeowners arrested by the police.

Yi Xiang said that when he arrived at the construction site, there were at least 500 workers on the scene.

Wages Siphoned Off by Agents, Quarantine Allowance Not Paid

“That depends on who hired you. The more subcontractors there were, the less you’d get paid” he said.

After the work concluded on Feb. 27, the workers were isolated for 14 days. The contractor, China Construction Third Engineering Bureau (CCTEB), promised a daily quarantine subsidy of 300 yuan ($42.40), which would be paid when the quarantine ended.

However, things didn’t go as planned.

At the end of the quarantine period, 14 days later, the Wuhan authorities did not allow workers to leave because of the city lockdown. CCTEB stated that workers would get a subsidy of 300 yuan a day. But they actually refused to pay.

Until March 27, hundreds of workers had been isolated. Starting March 14, fights had taken place between the workers and the CCTEB.

The CCTEB hired security guards, some with wooden sticks and steel plates to fight against the workers. Police arrived and arrested some. “The next day the same thing would happen again. They just refused to pay…so the conflicts were never resolved,” said Yi Xiang.

Finally, conflicts between the workers and the CCTEB were exposed online.

The Secretary-General of the Wuhan Municipal Chinese Communist Party Committee visited the conflict site along with reporters from state broadcaster CCTV on March 28. However, none of the workers were aware of the visit until the news was released on April 1.

“The so-called manager and the two workers they interviewed were not one of us,” said Yi Xiang.

Hubei native workers were left wandering on the streets.

By the end of March, when workers from other provinces had left and local workers had also returned home, Yi Xiang and another six or seven Hubei workers became homeless.

“We can’t leave, no one would hire us. Going home could only get the family into trouble,” said Yi Xiang.

The CCTEB drove them out of the quarantine site.

Yi Xiang told The Epoch Times that even though the CCTEB has agreed to negotiate, no action was taken.

“They made money by taking advantage of a national disaster and they won’t allow anyone to expose it. They handle this whole thing by harassing and illegal detention,” he said.

“When the workers were sick or having a fever, we would just get removed. We were the ones fighting on the front lines, and this is how they treat us.” Built in less than two weeks by 15,000 workers, Leishenshan Hospital has 1,402 beds in 32 wards and started to receive patients on Feb. 8, according to Chinese state-run media Xinhua.