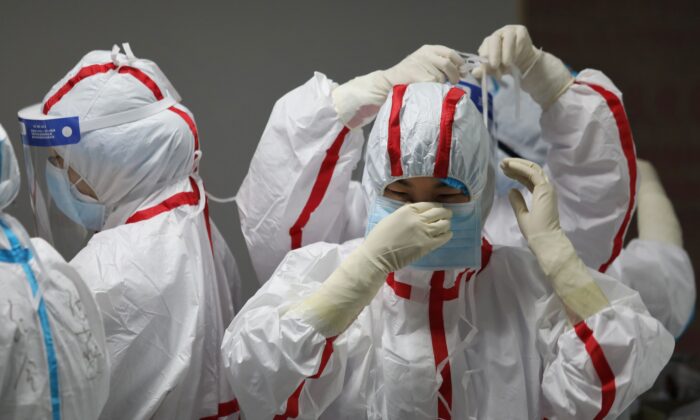 Ai Fen, a chief doctor at the Emergency Department of Wuhan Central Hospital, has recently posted online allegations of bribery against a Chinese eye hospital.

Ai was among the first to alert colleagues about the new COVID-19 disease that was spreading in Wuhan in late 2019. She has received attention again for her bravery in speaking up again against bribery of a large medical group in China.

In the past week, she published online lists of nearly 500 people—doctors, nurses, government employees, and military recruitment officers—who are allegedly involved in receiving referral fees from Aier Eye Hospital.

She rejected a reconciliation offer of money from the hospital and now she’s under pressure from all sides. Even administrators of Weibo—a popular Facebook-like Chinese social media outlet—wanted to delete her posts, Ai told the Chinese edition of The Epoch Times on Jan. 10.

The lists Ai has posted online are seemingly related to Aier Eye Hospital in Suqian city of China’s eastern-central coastal province of Jiangsu, as reported by Jinrongjie, a Chinese financial news portal, on Jan. 10. The alleged amount of bribery paid by the Suqian Aier Eye Hospital to the people on the lists is $126,000 in total during the three years of 2017, 2018, and 2019.

Details of the people on the lists include their names, workplaces, phone numbers, bank details, transfer date and amount, names of patients, surgery dates, etc., according to the report.

Ai told The Epoch Times in the interview that “certain employees of Aier Eye Hospital” had sent the lists to her. She had contacted some people on the lists, and some of them had confirmed to her the authenticity of the information, Ai said.

“Anyone referring patients to Aier Eye Hospital for operations can get money [for the referral],” Ai said, “I came to know the practice of all-staff marketing of the eye hospital long ago.”

On Jan. 9, Suqian Aier Eye Hospital issued an urgent statement, which seems to be a response to Ai’s online posts. It claimed that the online allegations of the hospital’s “irregularities” had been rectified as early as 2019 and that “the non-compliant staff had been dealt with seriously and the management team had been replaced.” The statement was posted on a Chinese state-run medical online portal on Jan. 10, and it does not include details of its punitive measures and the staffers involved.

A government document of 2020 reveals that Hengshui Aier Eye Hospital in China’s central Hebei Province was also involved in paying doctors of other hospitals for referring patients to Hengshui Aier Eye Hospital. According to the Hengshui market supervising body, it began to investigate the case in September 2019, and due to “the complexity of the case” and the impact of the COVID-19 outbreak, it made its final conclusion nearly one year later in May 2020 and issued the eye hospital an administrative penalty of less than $30,000 as the hospital had “actively cooperated with the investigation.”

Ai told The Epoch Times that she was under pressure from many sides, but she did not reveal more details.

A source provided two recordings to the RFA (Radio Free Asia) Chinese-language edition, which recorded an intermediary surnamed Zhang who proposed $472,000 to Ai for private reconciliation. According to RFA, the intermediary “repeatedly emphasized that it was people from the National Health Commission (NHC) that hoped Aier Eye Hospital would pay to settle the issue.” The intermediary also threatened Ai that investigations had been done to Ai’s family and her financial status and that there could be counterattacks against her, reported the RFA.

Some journalists told Ai that they had been notified not to interview her, according to RFA.

The RFA disclosed in the report that the majority of the people on these kickback lists are health care workers at local medical institutions and military officers responsible for recruiting.

But the source rejected to disclose to the RFA the names of the NHC leaders who were ordered to pressure Ai.

According to Ai’s Weibo posts, Luo Guangming, CEO of Jingzhou Aier Eye Hospital in China’s central Hubei Province is a brother of Luo Guanghui, who is the CCP’s party chief of the people’s congress of Huangshi City in Hubei Province.

“There are local shields, large and small, behind each local Aier Eye Hospital, with the largest shields even occupying key positions in the local government. These shields designate people to be directly involved in the operation and management of the hospital,” reads an online post by Ai.

Ai wrote that, in addition to the way of paying commissions, another form of bribery at Aier Eye Hospital is to give or sell partner stock options to family members of or designated people by relevant leaders. With the protection from those leaders, the hospital makes a good profit and buys back the shares at premium prices.

The Epoch Times has reached out to Aier Eye Hospital’s headquarters and Suqian branch respectively for comments.

Gao Miao and Sophia Lam have contributed to the article.