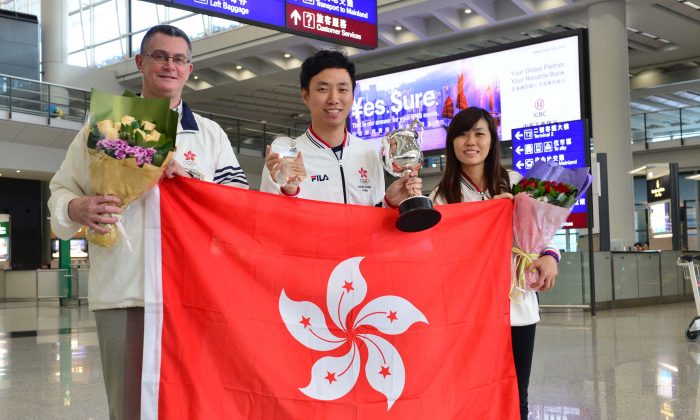 Wu arrived back in Hong Kong on Sunday Nov 22 on an early morning flight from Los Angeles together with Hong Kong coach Mike Seymour and Milki Ng who also competed in the competition to a hero’s welcome. The reception committee was headed by Vivien Lau, BBS, JP, Chairman of the Hong Kong Tenpin Bowling Congress, who presented Wu with a beautiful bunch of roses.

Naturally, Wu is delighted with winning the first world cup for Hong Kong since 2001 and proudly displayed the cup and the accompanying trophy. He was also happy to talk with the media present. He said he has now learned to live with the pressure in top matches of this type and he not only thinks of the result but enjoys playing. In 2011 he lost his father and he also had cancer to deal with and this has given him a different view on life and on winning and losing.

Another top bowling competitor mentioned to Epoch Times a few months ago that it’s a metal problem at this level of play, all top competitors can play to a high level in no pressure situations but keeping control of the mind in the pressure games is the key to success.

The Qubica AMF Bowling World Cup is considered a most prestigious bowling event competed for annually at selected locations around the world. Last year the event was held in Warsaw, Poland. It was last held in Las Vegas in 1999.

This year, competitors from 86 countries and territories were accepted into the men’s competitors and 71 for the women’s tournament all displaying the talents of their top bowlers.

The tricky bowling lanes at the Sam’s Town, Vegas venue gave many bowlers trouble, including Wu who struggled on day-1 of the qualifiers ending the day in 12th place, but on days two and three he got better control of the lanes to finished the 3-phase qualifiers in 2nd place. Again in the 8-man round-robin stepladder he finished in 2nd place. He played the leader in his last stepladder match and just lost leaving him in 2nd place to play the 3rd placed player, Mohammad Jaris Goh, of Singapore in the semi-final.

Ms Lau told Epoch Times that although she did not go to Vegas, she was in contact with the Hong Kong team throughout the competition. It was only on the first day that he was in the 12th position, after the second day he moved up to 3rd position and on the 3rd day he finished in second place. I watched him grow up from the age of 13 when he joined the team and I saw him going up and down. So after so many years having obtained medals in the Asian games his dream is to be world champion. But it takes time. The environment and everything is favourable for him this time.

Hong Kong’s head coach Bill Hoffman did not go to the event this year but Del Ballard of the USA lead the coaching with Mike Seymour of Australia, assisting.

Seymour explained the first two days weren’t as good as they could have been but on the third day he [Wu] was sensational, solid all day to get into the step ladder final. In the final he beat Francois Louw of South Africa in two straight games 233-219 and 223-180.

Wu has two more World Bowling competitions lined up for this year; on Friday Nov 27 he will fly to Doha, to compete in the Qatar Open 2015 and after that will travel on to Riyadh for the 9th Kingdom International Open Saudi Arabia.

The winner of the women’s Qubica AMF World Cup was defending champion Clara Juliana Gurrero of Columbia and the runner up was Shannon Pluhowsky, USA who has already won the cup on two previous occasions.