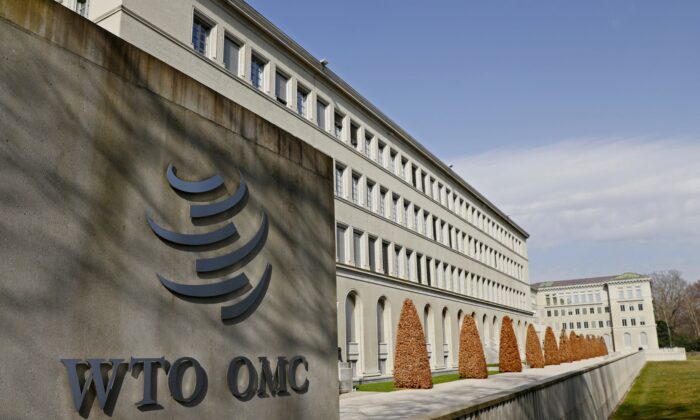 The World Trade Organization (WTO) said on Nov. 26 that it was calling off a key upcoming ministerial meeting in Geneva, Switzerland, citing disruption to international travel sparked by the emergence of a new COVID-19 variant that the WTO described as “particularly transmissible.”

The WTO’s 12th Ministerial Conference (MC12) was scheduled to kick off on Nov. 30, but the announcement of travel restrictions and quarantine requirements in Switzerland and other European countries in response to the new variant, dubbed Omicron, prompted the transnational organization to announce it was postponing the meeting indefinitely.

“Given these unfortunate developments and the uncertainty that they cause, we see no alternative but to propose to postpone the Ministerial Conference and reconvene it as soon as possible when conditions allow,” WTO General Council Chair Ambassador Dacio Castillo said in a statement.

“I trust that you will fully appreciate the seriousness of the situation,” Castillo added, with the announcement coming as a number of countries imposed travel bans from southern Africa and other restrictions, like quarantine requirements.

Authorities in the European Union are seeking to halt air travel from the southern African region amid rising concern about the variant.

“The Commission will propose, in close coordination with Member States, to activate the emergency brake to stop air travel from the southern African region due to the variant of concern B.1.1.529,” EU Commission chief Ursula von der Leyen said on Twitter Friday.

Officials in Japan confirmed Friday that they would impose a 10-day quarantine requirement on anyone traveling from southern Africa.

“The key to crisis management is to prepare for the worst,” cabinet secretary Hirokazu Matsuno said Friday, according to the Japan Times newspaper.

WTO Director-General Ngozi Okonjo-Iweala said the travel restrictions would prevent some delegates from taking part in face-to-face negotiations at the meeting, with many of them viewing virtual participation as ineffective for complex negotiations on politically-sensitive issues.

“My priority is the health and safety of all MC12 participants—ministers, delegates, and civil society,” she said in a statement. “It is better to err on the side of caution.”

Little is known about the new COVID-19 variant, detected in South Africa, Botswana, and Hong Kong, but South African scientists say it has an unusual combination of mutations and may be able to evade immune responses or make it more transmissible. COVID-19 is the disease caused by the CCP (Chinese Communist Party) virus.

A key part of the WTO meeting was to be negotiations around hammering out draft rules slashing subsidies to fisheries.

Santiago Wills, the Colombian WTO ambassador who chairs the fishing subsidy talks, told Reuters that the decision to call off the meeting was “deflating, to say the least,” but vowed to keep working towards an agreement to preserve global fish stocks.

Drafting rules on prohibiting subsidies that threaten the sustainability of fishing has been on the WTO agenda since 2001.

The WTO said in a Nov. 8 statement that significant progress had been made on the issue in recent discussions and that it was hopeful for a “successful conclusion to the 21-year-long negotiations” at the now-canceled meeting.