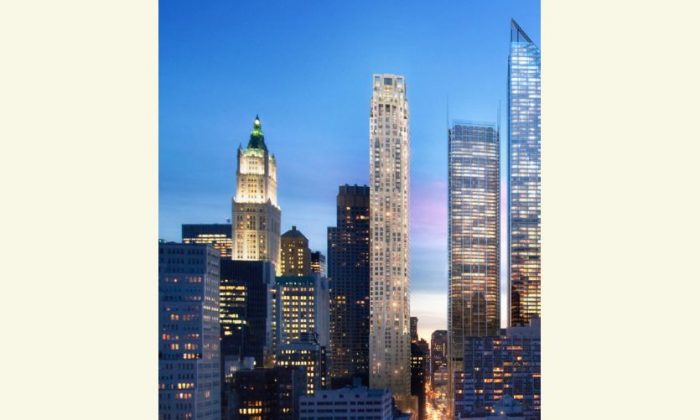 The future 30 Park Place tower can be seen in this rendering by Robert A.M. Stern Architects.
NY Real Estate

NEW YORK—World Trade Center developer Larry Silverstein’s plan for a hotel-condo tower at 30 Park Place is moving forward after a London-based investment firm has agreed to provide a construction loan of $660 million.

Silverstein said that construction on the 82-story super-luxury tower will begin this fall and the building will open in 2016. The skyscraper will be the tallest residential tower in Manhattan when it is complete. The entire project will cost $950 million.

The 926-foot tower will be on the same block as the Woolworth Building and just a block and a half from the World Trade Center.

“The day it opens, the Four Seasons Hotel New York Downtown will be the top hotel and apartment building in Lower Manhattan,” Silverstein stated in a press release. “It will join and enhance a world-class neighborhood that is already home to a dynamic blend of modern office towers, private residences, high-end retail and dazzling public spaces. Downtown is fast becoming a vibrant, integrated, mixed-use destination on a scale not seen in New York City since Rockefeller Center in 1939.”

The building will include a 189-room Four Seasons Hotel. The Wall Street Journal reports that condos in the building are expected to sell for as much as $34 million for a penthouse.

An entrance from Barclay Street will lead to three floors of lobbies, lounges, a restaurant, ballrooms, and meeting facilities, as well as a spa, fitness center, and pool.

The building was designed by Robert A.M. Stern Architects. Marketing and sales for the condominiums are expected to start in the spring of 2014 and will be handled by Corcoran Sunshine Marketing Group.

“30 Park Place will counterpoint the glass-and-steel office towers that Larry Silverstein and his organization are building along Greenwich Street, and together these buildings will help Lower Manhattan realize its potential as one of the best places to live and work in the country,” Robert A.M. Stern, founder and senior partner of Robert A.M. Stern Architects and dean of the Yale School of Architecture, said in a press release.

Earlier plans for the long-vacant property were shelved after the 2008 economic downturn. The site was previously the home of the 11-story Moody’s headquarters, constructed in 1951.